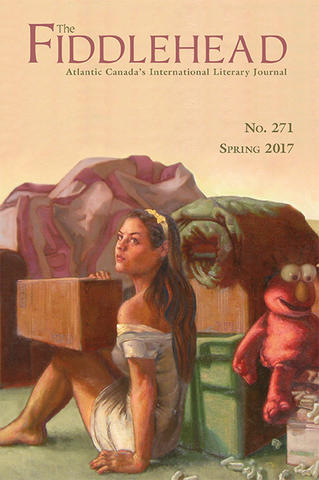 Vivaldi’s spring arrives in stately majesty, in grand procession, replete with flounces of embellishment. How could you not love spring in Italy? The first movement of Mahler’s Symphony No. 1 evinces a melancholy spring, with occasional crescendos of ebullience. This is also a symphony that takes the waking of Frère Jacques and transposes it to the minor mode to make a funeral dirge. It is a hunter’s funeral, with a procession of animals. Stravinsky’s Rites of Spring also begins with banter of despondency, followed by the thumping of low notes that sounds like the piledrivers of spring’s urban construction sites.

There are more ways of feeling the complex emotions of spring than can be imagined, but isn’t it wonderful that the musicians of language can imagine so many? Don’t pause a moment to immerse yourself in our spring issue: spring ahead an hour into the glorious daylight and let it wash over you. It is that time of year when we celebrate writing in our contest issue.

The Fiddlehead is always and forever grateful for those who read the poetry and fiction so carefully, and choose our winners and honourable mentions. There are so many difficult choices to make. So I offer a heartfelt thank you to Liz Howard, Richard Kelly Kemick, and Soraya Peerbaye for their attention to this year’s poetry, and to Rabindranath Maharaj, UNB’s writer-in-residence this year, for his thoughtfulness in reading our fiction.

Dominique Bernier-Cormier’s “Fabric” is a complex meditation on his Acadian background and the vicissitudes of the Dérangement. It is a poem both melancholy and playful, and it is our winner this year. Richard Kelly Kemick calls it “a compelling narrative told in a unique and sophisticated voice.” He notes that the poem gestures to the political, but its first-person narrative shapes constantly shifting experiences of time and memory. Liz Howard simply says: “Here is a poem that reads like an old friend. Welcomes you in wry and all decked out for the occasion.  A brilliant reach in themes. Fantastic.”

The honourable mentions are Tammy Armstrong’s “Blessing the Boats” and Kim Trainor’s “Bluegrass.” “Blessing the Boats” has the apparent simplicity that is as tricky as the surface of the sea, a mode that is familiar from Armstrong’s recent books The Scare in the Crow and Take Us Quietly. Liz Howard observes that “there is a sustained dedication here to lyric power, but within a subtlety that belies a hometown hearth.” “Bluegrass” assembles a series of ghazals that have that uncanny breaking of sense that somehow coheres in its emotional accuracy. Soraya Peerbaye enjoys “the form/imagery of this poem; vivid; the taut verse and syntactic construction; the terseness of tone, the ambiguous emotion underneath.”

The winning entry for fiction is Kate Finegan’s “Blues Too Bright.” The story opens with a querulous mother who, after the first break in the story, has died. The story proceeds with the grief of a daughter, but in quirky, surprising, and engaging turns that involve the tensions and complexities of families. Robin Maharaj exclaims: “This story is pitch-perfect. Here, the writer competently balances humour and pathos, not always an easy combination.” He proceeds with this lovely characterization: “The story could easily have sunk into melodrama or perhaps a picayune account of a family squabble, but the writer’s voice, alternately bemused and detached, gives the revelations the correct dose of bleakness.”

Our honourable mentions are Steven Benstead’s “Will There Be Clowns?” and Ann Cavlovic’s “The Foundation.” “Will There Be Clowns?” has a haunted house!  Robin states that it is a “perfectly plotted story” and the “atmosphere is perfect in this story of unusual twists and turns.” Robin describes Cavlovic’s “The Foundation” accurately and fully when he notes that, “On the surface, it is the story of a woman who experiences a sexual yearning while helping to fix a friend’s cottage, but it is also an evocation of loss and regret and eventually appreciation.”

It was Robin who stuck his head in my office door to tell me of the death of Derek Walcott, and it seems appropriate to take a moment’s pause to acknowledge the career of a poet whose command of language appeared absolute. Walcott had such an extraordinary ear for the possibilities of rhythm in the English language. He taught a course at the University of Toronto, and I sat in a couple of times. He had us reading Philip Larkin aloud first as a class and then in rounds. At the University of New Brunswick I was an examiner for a doctoral thesis that brilliantly sounded out the Caribbean rhythms of Omeros. We are fortunate to be able to carry his poetry with us in our book bags.