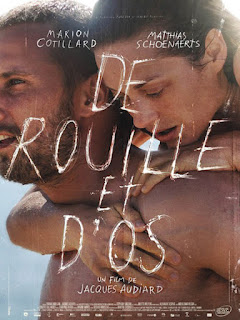 It starts in the north. Ali (Schoenaerts) ends up with his 5-year-old son Sam, whom he barely knows. Homeless, penniless and friendless, Ali finds refuge with his sister in Antibes. There, it's immediately better, he lives in her garage, she takes care of the little things and it's nice..... Click for trailer