An interview with Anna Swanson 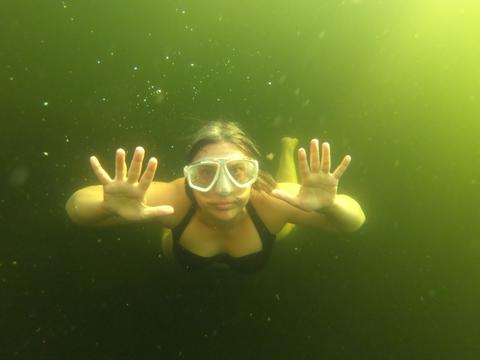 Editorial Assistant Melissa Spohr Weiss interviewed Anna Swanson about swimming and writing, creating “found poetry” out of “garbage words,” and her mode of poetic creation that at once came out of and embodies the lived experience of physical and cognitive constraints following a serious concussion. Anna Swanson’s poem, “Portals,” will appear in the upcoming special 75th anniversary issue of The Fiddlehead that will be published in spring

Melissa Spohr Weiss: I’d like to jump right in with a question about your “Garbage Poems” series. What is your process when creating your found poetry? Do you begin with a particular topic or idea, or do you allow the words to guide you?

Anna Swanson: Although the garbage poems didn’t begin with any particular plan or intention, I’ve realized that they’ve become intertwined with my experience of living with chronic illness. When I stumbled into this project, it had been five years since a serious concussion. This weird little project was the first writing I’d done in years. At a basic level, I think that’s one of the reasons that constraints appealed to me. I’d gotten used to living with physical and cognitive limitations, and I think it was a relief to struggle with constraints I’d chosen myself. I made the rules up as I went. All the words in each poem, except the titles, were transcribed from garbage I’d collected at swimming holes. Each pond or river had its own word set. Within a word set, I allowed myself to combine words, or add floating letters to the end of other words, but I wouldn’t break words apart.

Swimming does something miraculous for my nervous system, and the writing process has become as much about swimming as it is about collecting garbage. The poems might deal with anything from how a body responds to cold water, to observations of strangers in a heatwave, to body image, to the joy of diving into a still pond. Because swimming has become one of the ways I manage health and mental health issues, the poems often circle back to those experiences. Sometimes I give myself an assignment, challenge myself to describe something that intersects with swimming—depression, joy, fatigue, cold shock—using only garbage words. I’ve come to think of this as a translation activity, where the poetry is a by-product of the effort of translating a basic concept into unfamiliar language. Approaching writing from a place of play has made me realize that my creative voice, which often felt tenuous after the concussion, is also a tenacious thing that can shine through when I’m least expecting it. I feel less like I’m writing poems, and more like I’m throwing together thousands of word combinations and having the good sense to recognize poetry when it happens.

MSW: Obviously when you limit your writing to a particular set of words, you also become more limited in the images—and emotions—you can create. However, your poem “Portals” is oozing with rich imagery: “dim peripheral, something sideways,” “perfect doorway of my outline,” “wet with crossing.” How do you build such captivating images with a limited selection of words?

AS: This is one of the things I like most about working with a limited word set. I might actually be trying to say something more boring or cliché, like “dripping wet,” but if those words aren’t available I have to look for another, often weirder, way to say it. Hence, “wet with crossing.” New meanings and images creep in accidentally. Something sideways is actually a great way to describe what it’s like trying to write without using the words you’d normally reach for. The language of packaging and marketing tends to be hyperbolic, energetic, imperative. It can be a challenge to reclaim that language and make it mean something again, but there are some juicy words in the mix.

In some ways, obviously, making poetry out of beer label and chip bag words is harder—it can take me hours to find a handful of words to describe a basic action like diving—but in some ways it’s also easier. My head injury affected my cognitive abilities in a way I often describe as going from high speed internet to dial-up. It’s not that I lost the ability to speak, read, write, or ride a bike, but my bandwidth was extremely limited. A game of scrabble could literally bring me to my knees—for a while my legs would give out if I pushed my brain too hard—and writing poetry was simply beyond me for a few years. When I started this series of poems, I realized that it was easier to trick my brain into writing poetry by starting with a puzzle instead of looking at a blank page. Working with limited words forced me to say things in unfamiliar ways, and the process became a scaffold that helped me teach my brain how to do poetry again.

MSW: You mention that your titles are the only thing not sourced from the garbage you find. Why is this? What is your process in titling a poem?

AS: Maybe it started as cheating? I enjoy rules, but I also enjoy making them up as I go. Having that free reign in the title allowed me to use the poem to describe an experience, and not worry as much about identifying it. One of my poems compares submerging in the river to the Mikvah, a Jewish ritual bath. I wasn’t going to find that word on a beer can, and I’m not sure I could have made the reference clear (especially given it’s not a familiar concept for many people). But putting the word in the title left me free to spend the poem describing the feeling, and letting new images emerge, rather than fixating on whether I could communicate the specificity of that particular reference. Looking back at the project, I think the titles often describe the scene in plain language, and the rest of the poem is the process of translating that same picture into the language of found text and poetry.

MSW: What’s next for you? Do you have any upcoming projects you can tell us about?

AS: I’ve been working with visual artist April White (whose work is also featured in this issue) to illustrate this series. April has been painting watercolour portraits of the found pieces of garbage that are the source material for the project. We initially got a grant to work together on an interactive website project for the garbage poems, which uses her watercolour paintings of beer cans, chip bags, pop tarts, and pineapple crush, to answer the question, “which piece of garbage did this word come from?” This also led to a more profound collaboration based on a shared obsession with swimming, and an interest in art that explores tiredness, chronic illness, and everyday non-heroic bodies. We’re now working on turning the garbage poems and April’s watercolours into a full-length book. I’ve also spent months trying to write a short essay about the process for the back of the book, with many false starts and tangents. There have been so many tangents that I’ve considered working on a collection of essays about chronic illness, concussion, and swimming. I’m currently fascinated by nervous systems, polyvagal theory, and the science of cold water swimming. There are enough tangents there to keep me going for awhile.

Anna Swanson is a writer and public librarian living in St. John’s. Her first book of poetry, The Nights Also (Tightrope Books, 2010), won the Gerald Lampert Award and a Lambda Literary Award. Her writing has also appeared in various anthologies including The Best Canadian Poetry in English and In Fine Form: The Canadian Book of Form Poetry.