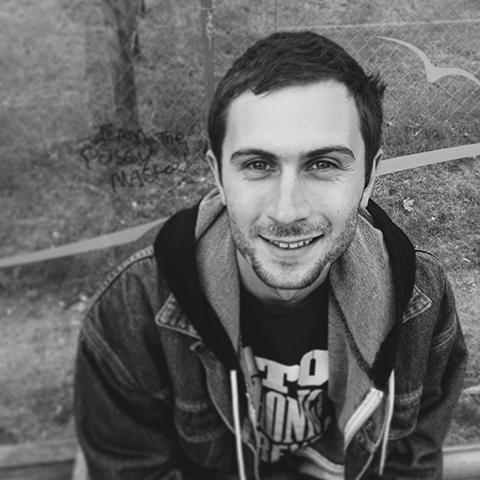 Jenna Albert: First of all, congratulations on winning the 26th Annual Ralph Gustafson Poetry Contest. You must be ecstatic!

Dominique Bernier-Cormier: I am, and I just want to say a big thank you to The Fiddlehead for running this great contest, and to the three judges (Richard Kelly Kemick, Liz Howard, Soraya Peerbaye). They’re all poets whose work I love, so knowing they liked the poem was really amazing.

JA: When and how did you discover your passion for poetry? I want to know your origin story. Did you start writing angsty poems in high school? Did you stumble onto poetry accidentally? Was it an early discovery or once you were already in university?

DB-C: I never really wrote as a kid, or even as a teenager, but I read a lot. And I guess I had that vague sense of wanting to “be a writer,” without having ever written anything. I started writing poems seriously in my second or third year of university. “Seriously” sounds like the wrong word, though. It was a lot of fun, mostly, and I was doing it on my own, without any real structure or community or pressure. Just playing around. What really made me commit to it was my first workshop. McGill offered one 12-person poetry workshop every three years, so when it was offered in my last year, I took it. Steve Heighton was teaching it, and that semester was a real crash course for me. I loved it. So I just kept writing poems after that.

JA: From my sleuthing on PRISM’s website, I now know that you have travelled quite extensively and have lived in Russia, China, and France. How have your travels influenced your writing? Is there anywhere that you desperately want to visit?

DB-C: Good detective work! My dad was a foreign correspondent for the CBC, so we lived in Moscow, Paris, and Beijing when I was growing up.

My MFA thesis is actually a non-fiction/poetry project about growing up in Moscow and some of the news events he covered as a journalist. Russia has stayed with me in a very vivid way — its landscapes, colours, voices. I’ve been thinking a lot about my impact as a tourist these days, so I’m trying to explore what’s closer to me (and it’s cheaper). I realized there’s so many things I haven’t seen here in Canada, in BC. So I’m excited to check out some sweet BC parks and beaches this summer. Hopefully do a big road trip back east sometime soon.

JA: What is your writing process? Do you keep meticulous notes, have a specific spot where you hunker down to get words on paper, or write wherever and whenever it comes to you?

DB-C: I keep a lot of little notes on my phone. Right now I have Minneflowta (?), Grapefruit spoon, Glow in the dark mini-put, and Ear bone. No idea what they mean, but hopefully they lead me somewhere interesting! Other than that, I just try to write whenever I have time. Mostly alone, on a computer, in the dark.

JA: What are you reading right now?

DB-C: I just read Hider Roser by Ben Mirov, Three Summers by Lisa Robertson, and Prelude to Bruise by Saeed Jones. I’m also reading Dear Leader by Damian Rogers (finally!). All amazing. And next on my list is Riot Lung by Leah Horlick and She of the Mountains by Vivek Shraya.

JA: As an Acadian poet, I am always interested in how someone’s French Canadian identity plays into their writing. “Fabric” is particularly preoccupied this. Was it a conscious decision to write about your identity as a French Canadian? Do you find that it comes up frequently in your writing?

DB-C: My French-Canadian identity didn’t come up in my writing for a long time, but it’s starting to now. I was so excited about writing poetry at first that I never even stopped to question why, as a Francophone, I was writing in English. Not that I feel guilty about it. I love the French language and it’s a huge part of who I am, but I think it’s OK to use different languages for different purposes.

I’m really interested in how being Francophone affects the use of English in my poetry, on a linguistic level. I used to think of my ESL-ness as a negative. But not so much anymore — I feel like knowing another language helps me see, by contrast, how weird and malleable and fluid English is. How much you can mess with it. When you learn a language late (14-15 for me), you see its circuitry a bit clearer. Also, sometimes people think that I’m doing really interesting things with grammar, or that I came up with a really fresh metaphor, but it’s just me being ESL. The particular story in “Fabric” is a family legend my dad’s been telling me since I was a kid. I tried looking it up, and it’s true that my ancestor Pierrot Cormier escaped the Fort Beausejour jail, but there’s no mention of how he did it. So I’m just trying to keep the story alive.

JA: The Fiddlehead often asks our editorial team and contributors what music they are listening to at the moment. Do you have any artists that you listen to while you write? I take it that Shania Twain’s “That Don’t Impress Me Much” is a given.

DB-C: Yes, always a healthy dose of Shania and Shakira (I really do have a Shania Twain leopard print outfit that I sometimes wear). The National, pretty consistently. James Blake. And recently, I’ve been obsessed with Young Thug. He’s doing some really cool things with language, kind of liquefying it in a surrealist, sound-poetry way.