An Interview with Susan Musgrave 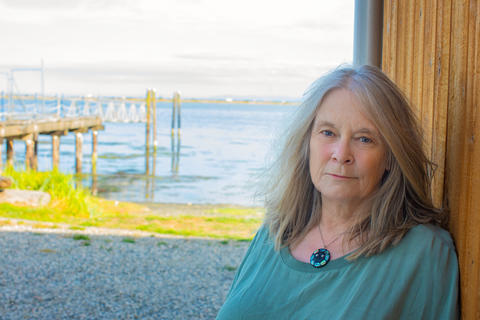 Editorial Assistant Melissa Spohr interviewed Susan Musgrave about her creative process, the roles of emotion, dreams, unknowing, and the subconscious, and the poet’s relationship to the poem in its becoming and ongoing revision. Three of Susan Musgrave’s poems—"More Than Seeing," "What We Do,“ and "Life in the Uncontainable World"—will appear in the upcoming special 75th anniversary issue of The Fiddlehead that will be published in spring.

Melissa Spohr: To begin, I’m wondering about your creative process. Where does a poem begin for you? How do you go from a rough draft to a polished poem?

Susan Musgrave: Robert Frost says, “A poem begins with a lump in the throat; a homesickness or a love sickness. A complete poem is one where an emotion has found its thought and the thought has found words.” He also said, “it’s never a thought to begin with.”

In my case it is most certainly never a thought to begin with. It’s a longing; it’s grief, love (especially falling in love), death, and more grief. Poems, for me, are sometimes conceived in a dream. Or they come via a line or image I read or overheard (I like to eavesdrop on the world). The poems published in this issue come from an exercise I set myself: every day I would read one of Mark Nepo’s “meditations” in The Book of Awakening and choose a word, or a phrase, to bounce off. I would use his words as the title. (Sometimes the words would change and have no bearing on the original. Sometimes the word was as simple as “rain.”) I told myself I was not going to type the poems out; I simply wanted to see what could happen if I wrote without an “end” in mind, i.e. publication. I wanted to take that particular pressure off myself, allow myself to write poems that weren’t very good, for instance. Of course in the end I couldn’t leave them untyped, unrevised. Two years later I am still typing them out and revising.

From a rough draft, I revise. And revise and revise and revise. Sometimes I have a hundred drafts for a poem. I come back to it every day (as long as it is on my radar) and change a word here, a word there. There have been times when I’ve gone on fine-tuning a poem even after it has been carved in stone, or at least printed on acid-free paper in a book. In the poem that became the title of my collection Forcing the Narcissus, I use an image of feeling the wind through “my rice paper door,” but I didn’t even know this wasn’t the image I’d been looking for until I was walking down Roncesvalles in Toronto, in the winter of 1995, a year after the book had been released. I saw a sign in a florist’s window—“paper-whites for sale”—and realized at once it was “paper-white” I hadn’t known I hadn’t been looking for (I still picture my grandmother forcing her paper-white narcissus every Christmas when I was a child). “Rice paper” had to go. In the second edition, at least, I could make it right.

What I learned from this experience is that even though you think a poem has abandoned you, the subconscious may still be hanging on to it, and that mental knots often loosen spontaneously when you step away from the task.

MS: “What We Do” invokes such an incredible visceral quality through its use of contrasting images. There’s the intensity of the “freshly slaughtered deer” and wings that “surrender to the choking dark,” but also the more neutral images of “boil[ing] water for tea” and “strok[ing] the cat.” How did you decide which connections to make?

SM: It’s in the process of revision where these (subconscious, most often) decisions are made. I have also learned that the poem, in and of itself, has something to say about the final form it is determined to take, despite whatever you intended. You must be attuned to the poem’s effects, alert to the expectations raised by any new word you decide to substitute for another, and doubly aware of how the poem changes those expectations in order to satisfy itself. Rewriting, then, is not just a matter of craft and technique, but a whole new way of seeing, a re-vision.

In the midst of deep grief, or World War II, what do we do? We put the kettle on and make a nice cup of tea. We stroke the cat. To do anything else would be to succumb to the whirlpool. Small things keep us safe.

MS: All three of these poems seem to ask the reader to slow down and savour a particular moment—a technique I’ve always found hard to execute. What is your strategy in capturing a moment or emotion in a poem?

SM: I don’t have a conscious strategy. I approach each poem not knowing where it is headed. Quite often it will take me somewhere I never intended to go. In my life I work hard at taking my delight in momentariness. Maybe my attempts are spilling over into my poetry?

MS: The natural world seems central to all three poems—the kingfisher, the doe, the cedar, spruce, and hemlock. Do you regularly draw inspiration from nature, or is it unique to this suite of poems?

SM: I mentioned that I simply wanted to see what could happen if I wrote without an “end” in mind. I started with a word or phrase from The Book of Awakening and stared out the window until the words came. Since I didn’t have anything “in mind” I allowed myself to incorporate whatever I could see beyond my window, in the natural world. There are kingfishers out there, and eagles, and a tidal river that constantly changes, and deer and hemlock, cedar and spruce.

MS: What piece of advice would you give to new or emerging poets?

SM: You have to like writing better than being loved. If you love the process more than the product, if you want to write, not simply to “have written” you are on the right path. Whatever you get criticized for, as a young writer, keep doing it. It is probably what you do best.