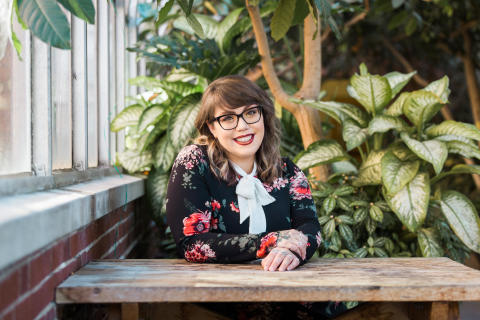 Jenna Lyn Albert is an active member on the city’s creative scene. She is a member of The Fiddlehead Magazine’s editorial board, a first reader of poetry submissions for Goose Lane Editions, and has a variety of work and volunteer experience in the literary community including, The UNB Reading Series, the New Brunswick Book Awards, and QWERTY Magazine.

Miss Albert is a graduate of the University of New Brunswick. She holds a Master’s Degree in English (Creative Writing) and an undergraduate degree in English. Her debut collection of poetry, ‘Bec & Call’, was published by Nightwood Editions in September 2018.

Albert has proposed numerous initiatives for public engagement over her two-year tenure, including a bi-weekly poetry podcast featuring local poets, booksellers and artists, a downtown poetry tour, poems of the week, and free poetry workshops.

Details on these and other projects will be released at a later date.

About the Poet Laureate:

The Poet Laureate position (formerly known as Cultural Laureate) was established in 2016 and was an action item of the City’s Culture Plan, adopted in 2014. Ian LeTourneau was the City’s first Laureate. Among other things, during his term LeTourneau wrote 10 poems celebrating Fredericton culture (including poems about Willie O’Ree and Perley the Magician), and in 2017 launched Word Feast – Fredericton’s Literary Festival.

The roles and responsibilities of the position include engaging with the community through activities, programs, and events, both traditional and innovative, to demonstrate the power of the arts to inspire, influence, and inform.

A steering committee made up of professionals in the literary community and the city’s Arts and Culture Advisory Committee took part in the development of the terms of reference for the position and the selection process."