Many Fiddlehead Contributors on GG Shortlists!

Congratulations to all the Governor-General Literary Award shortlisted authors announced today by the Canada Council! Five of the shortlisted authors have appeared recently in our pages. Kate Cayley's story collection How You Were Born is up for the fiction prize. Cayley's story "Young Hennerly" appeared in No. 254 (Winter 2013). Most recently she had two poems in No. 262 (Winter 2015). The full fiction list is:
The Fiddlehead is very happy to see that four out of five authors shortlisted for the poetry award have been recent contributors. The full shortlist is:
Kayla Czaga won The Fiddlehead's Ralph Gustafson Prize for Best Poem in 2014 for "That Great Burgundy-Upholstered Beacon of Dependability," which was published in no. 259 (Spring 2014). We featured three poems from Patrick Lane in our West Coast issue, no. 253 (Autumn 2012), and last summer's poetry issue, no. 260, featured three more poems from Czaga, as well as two from Robyn Sarah, and a substantial retrospective of M. Travis Lane's career, edited and introduced by Shane Neilson. Neilson also recently edited The Essential Travis Lane (Porcupine's Quill, 2015) and How Thought Feels: The Poetry of M. Travis Lane (Frog Hollow Press, 2015). Two more books are forthcoming by Travis as well: Palimpsest Press will be publishing a Selected Prose in 2016, and Goose Lane Editions will be printing a collected long poems in 2016 or 2017.
Tags:
stop-look-listen 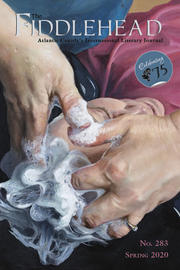