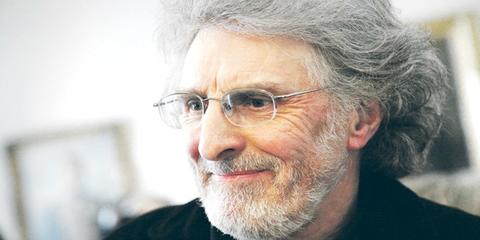 The Fiddlehead mourns the loss of the great Newfoundland writer Paul Bowdring, who was a long-time member of our advisory board. Paul died earlier this year on June 7. Below is his friend Don Austin’s tribute, given as an oral presentation at a memorial service.

Paul Edward Bowdring was born in Newfoundland on Bell Island on the 24th of March 1946. He told me once that, originally, the family name was Bowdrin, and that the g had been added later by a priest. He was nurtured and, I imagine, doted over like a little Prince by two women: his mother Marie and his aunt Pearl. This upbringing must have given him a sense of entitlement and helped him live the successful life he subsequently led. He never talked much about Bell Island, and only went back occasionally to tend to a gravesite or recently to organize a benefit for the local library at a time when the government was about to close half the libraries in the province. He gave the impression that he had crawled away from his birthplace while still in diapers and had never looked back. Bell Island was a centre for the mining of iron ore when he was growing up there, and he sometimes described writing as being "at the rock face, chipping away." In the early days, learning his craft, it was often like that for him. He told me he would sometimes spend a whole writing session and only take out a comma, then put it back in again at the end.

Paul wore a number of hats atop that great wooly head of hair. (A friend of mine called it a "wooge" which I always imagined as a tangly shrub that harboured birds and small mammals or, in Paul's case, words and images. When I finally looked it up in the Dictionary of Newfoundland English, I found out that it meant simply a tousled head of hair.) Paul excelled as a writer, teacher, mentor, social activist and editor. But I think you were particularly lucky if you knew him as a friend. He was the most generous one anyone could ever want. He included you in everything. The only problem was, you could never ask him for a favour. You couldn't because, before you had a chance to, he'd have already offered it.

We met at MUN in the mid-sixties. He was tall and dark, a brooding Hamlet, never without a girlfriend or a car although they both could be problematic at times. Eventually, we shared an apartment above a Groc 'n' Conf on Stamps Lane close to Paul's beloved apricot squares just down the road at Stockwood's Bakery. We self-published a small chapbook of our poems. Hamlet here came up with the title: "Mortimer Schlatt's Love and Torture Manual." We sold it for twenty-five cents and it was still a hard sell. Undeterred, we started a poetry magazine, Squonk, named after a mythical creature which dissolves in its own tears when cornered. True to its name, it vanished after the first issue.

In restaurants, Paul could be a very picky diner. He would tentatively lift the top bun of a hamburger and peer underneath as though he'd been sent to dismantle a time bomb. Someone once described a novel as "a long work of fiction that has something wrong with it." A restaurant meal to Paul was often a plate of food with a flaw or a fly in it. After many years, he finally settled on the dependable and ubiquitous pan-fried cod. He ordered it so often that he may have been partly responsible for the cod stocks inability to rebound.

He was a wonderful friend, but he was also an idealist with such strong opinions that he ended up on the outs with pretty much all of us at one time or another. Then, after a while, all was forgiven and you became better friends than ever. I occasionally played Horatio to his Hamlet, doing errands for him at the worksites of people he was trying to avoid.

Paul was someone who really savoured life, and so I think he is best defined by his enthusiasms. One of them was his family. He met Glenda Ellsworth at a party in the mid-70s. They were both teachers. To paraphrase Leonard Cohen: she told him then she preferred non-teaching men, but for him she would make an exception. When Glenda was pregnant with Julia, she told me they didn't know the gender of the baby, but confessed that she hoped it was a girl. I don’t think I'd know how to raise a boy, she said. I'm sure you'll be fine, I said, you’ve done such a great job with Paul. And she had. She looked after his needs and gave him the space in which to write his books. She told me recently that she couldn't have picked a better partner or a more interesting life than the one she's had with Paul. I sometimes had the feeling over the years that Paul, as an only child, had always wanted a sibling. Then he discovered, late in life, that he had one, Adrian Doyle. Biologically a half brother, but I know for a fact that they thought of themselves as true full brothers.

Here are some of the other things he loved in no particular order:

Reading: Ian McEwan, Philip Roth, Yeats and Eliot, Shakespeare and Chekhov, Harold Bloom and his western canon. Cynthia Ozick said that her idea of heaven would be sitting under a tree eating chocolates and reading. Paul might well agree. Walking: The idea that things — personal, physical, writerly — are solved by walking. On a walk a few years ago, I learned that we had independently come up with the same metaphor to describe the writer's life. A writer is like a dung beetle, we decided, destined to roll a little ball of dung every day until, after a long while, it had become a big ball of dung. And then, of course, the real work began. Music: Mozart, classical folk, Cohen, Dylan, early pop. He saw the Beatles when they played Shea Stadium in New York; I saw them, he said, but I couldn't hear them over the screams. Coffee and bookstores: One time we combined both by having a cup at the original Starbucks in Seattle and then slept that night in the bookstore of a friend.

Paul loved World Cup soccer, playing tennis, high end stereo equipment, the consolation of pastry, organic oranges, songbirds, a Friday Guinness at the Duke of Duckworth, film director Mike Leigh, trouting, a good argument, his summer uniform (white New Balance sneakers with cargo shorts and a black t-shirt), the Montreal Canadians, Manchester United. Puns. If he'd had a coffin there would have been Paul-bearers. I think he would have liked that pun. He loved Newfoundland, but he wasn't a gatekeeper. He knew that we had all been immigrants originally. The shade: Early on, he had suffered from migraines triggered by bright light so he always wore visors, peaked hats, sunglasses. He would insist on sitting so far back in movie theatres that we were practically out in the parking lot. Dandelions: Julia told me that when Paul mowed the lawn, he would do it in such a way that the grass was cut but the dandelions still stood. Comfort: An old dressing gown; an upholstered and reupholstered blue chair which he'd carted from apartment, to house, to house until, finally, it was sculpted into the shape of his back; the pleasure of reading on a shady deck on a lazy summer afternoon at his place around the bay.

And, oh yes, I almost forgot, and I'd have painted a lop-sided picture of him if I'd omitted it: Flatulism. As serious, not to say daunting, as Paul must have seemed to those who did not know him, he was an elite, world class flatulist. That's the ten-dollar word for a windbreaker, and I don’t mean the jacket. These weren't the little fluffs the rest of us try to hide behind a fake coughing fit. These were Wagnerian displays that even extra strength Beano couldn't muffle, and that EJ Pratt might have immortalized in an epic poem, performed "...not with that dull, unsinued tread held under bonds...but with a lusty stroke of life." Like a kid with his first whoopee cushion, he took great delight in these performances. Tolerated, if not exactly celebrated by the rest of us, they were in the end, so to speak, a compliment and showed he felt comfortable in your presence.

Finally, Paul loved going down to the Regatta for the last race. And so it's fitting that his ashes will be placed in a columbarium at the Forest Road Anglican cemetery next to Quidi Vidi Lake. There's an old story, most likely exaggerated, if not apocryphal, about the flooding of that graveyard during heavy rains just before regatta day years ago. A coffin floated loose during a race and for a while was in 2nd place until it had to turn at the buoy. Paul was so competitive, if that ever happens again, I'm certain he will win.

So this is Paul's story, and now we know how it ended. Hemingway said, all stories if continued far enough end in death and he is no true story teller who would keep that from you. Paul might have faced a hamburger with some trepidation, but I can tell you he confronted his own death with great courage and equanimity. And so, as Horatio, I say, "Good night, sweet prince, and flights of angels sing thee to thy rest." And as myself, I say, "We love you, Paul. See you later."