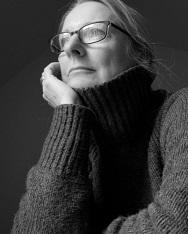 Documented
After a photograph taken in Dresden, 1972

Look how we’re fearless in the ruined face
of that infamous city—years on, still fire-bomb-
charred, the shell of its once-beautiful church
Communism’s constant admonishment to
those who dare any persuasion but its own.

That summer, we drive behind the Iron Curtain
into your German war story, the 1950s escape
enabled by a visitor’s pass, family waiting
in the West and a mother who told the police
when they came knocking: She’s not coming back –

But you do go back, the proof’s in my hand,
this black & white documentation tattles
on us all: three young daughters, you, your sister
and a half-sister already taller than your husband –
our shoulders set against Dresden’s breeze

and those eyes we sense too well, peering at us
from behind each twitching blind – here we are
crossing the Elbe’s wide steely divide
by the Augustus Bridge, walking away from
Uncle’s constant gauging of another photo op,

the open eye of his camera aimed, watching,
its shutter a trigger clicking beneath his finger.
We walk on, ignoring this man we barely know,
not glancing back to smile for posterity’s sake
or to stare-down the future’s intrusive gaze.

To a friend who confesses with some shame
how his studious habits never let him skip
class in high school, how he needs to believe
it’s not too late to reclaim an unspent youth,

I relay details of the day a group of us ditched
one period during a work-to-rule. English was out,
since we’d miss Oedipus Rex on vinyl, the teacher
cranking up the sound at the eye-gouging scene

and the actor’s blood-curdling howl of revelation
as it sailed out the open door to pierce a silent hall.
No, we chose to cut Latin—of five students
to tackle it an easy second year, we four stupidly

marooned our prim, well-meaning instructor
with his tweed jacket, chalk dust, and declensions
in an empty room. A poor joke. Mostly we wanted
to feel how it was to be AWOL, bad, culpable—

Of course we knew we’d pay for straying off-
course, and on cue next day, the guilt trip
he laid on us was so splendid, so reasonable,
a week of detention would have hurt less –

oh, he knew we didn’t plan to be scholars, et cetera
but he’d expected more of his best pupils.
Here, a smart-ass might have cited the obvious—
our missing fifth, the hunched girl who first tried

to disappear behind owlish round glasses and
pale curtains of hair, who was from term’s start
in absentia even when her body occupied a desk
and before long, it stopped showing up too –

what of her? what lesson did she net from
the system we pseudo-rebelled against once?
Disappointment played the stage with lead feet,
our silence a dutiful chorus of mea culpas.

Ingrid Ruthig is the author of Slipstream and This Being, winner of the 2017 Gerald Lampert Memorial Award. Her work has appeared widely, most recently in Resisting Canada (Véhicule Press, 2019). A 2018 Hawthornden Fellow and editor of several books, she is currently working on another volume for Porcupine’s Quill’s Essential Poets series.