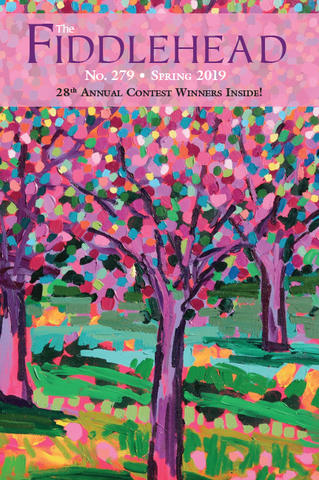 I have just looked at the mock-up of the cover for the spring issue, and its millenial pink is making me consider the possibility that the shoulder-high snowbanks lining the driveway might not last forever. Thank you, Ian, designer extraordinaire.

There is, of course, plenty beside the colour pink that makes this issue exciting. Kazim Ali, for starters. His poetry is featured in a special folio, presented by our former editor-in-chief, Ross Leckie. Kazim Ali was born in the UK and now lives in the US, but did you know he was raised in Manitoba, in Pimicikamak territory? (Check out “Golden Boy,” 11-12.) So we’re delighted to claim him as a Canadian. Kazim sent us a selection of new poems to include with the retrospective Ross has put together, and we were so taken by their elegance and gravitas that we boldly asked if we could print all of them — you’re welcome, dear reader.

This is also our contest issue, in which we present the winners of the fiction and poetry contests. But first I’d like to take a moment to celebrate everyone who entered, indeed everyone who has the courage to write. It takes guts to attempt to bring words to the page, to dare say something to or about the world. And it takes guts to then submit your work to a journal. Whether the words make it into print or not, I’m grateful for the contributions of each author, and I hope that recognizing a handful of particularly accomplished works doesn’t diminish the efforts made by all the entrants.

Our fiction contest this year was judged by Carrianne Leung — thanks, Carrianne! She has selected as the winner “My Name is Bridge” by Ahmad Danny Ramadan. Leung says, “Through lyrical storytelling, the author weaves together magic, myth and maternal love to describe women finding their power even as they struggle against the patriarchal powers that try to contain them. ‘My Name is Bridge’ is full of striking images and poetic prose to draw this poignant story of intergenerational love between women.”

Honourable mentions go to “Telling Lives” by Jacqueline Mastin and “The Rabbit” by Michael Maitland. Leung was impressed by the voice in “Telling Lives,” which she says “captures the excitement, danger and heartbreaking loyalty of girlhood and friendship.” She also notes the precarious terrain the story negotiates and the risks taken along the way. Leung praises “The Rabbit” for its gritty detail and observes, “[t]his story tenderly and brutally reveals the making of manhood through the eyes of a boy and the cost of innocence that is paid.”

Our Ralph Gustafson Poetry Prize judges were Phil Hall, Nyla Matuk and Claire Kelly — thanks to all three for their efforts. First prize goes to “Paper birch” by Kim Trainor. As Matuk says, “The metaphor is beautifully spun out along the entire length of the poem and the language has the speaker finding a familiar but beautifully observed egotistical sublime in her environment, almost as if her love of it surpassed the longed for lover at the other end of the Skype wire.” And Hall writes, “This is an epistolary & braided poem that catches recent crises, scientific language, internet calls, & metaphor — all in its confident weave. Here is a passionate poem about interconnectedness & precariousness — skin & paper & bark as one.”

Honourable mentions go to “Wingspan” by Nolan Natasha and “Avian Circulatory System” by Alycia Pirmohamed.  Kelly says of “Wingspan” — “[t]he first things that drew me into the poem were the excellent line breaks and the precise and evocative similes.” She also notes the skillful way in which “the end of the poem folds deftly back into the beginning, with cousins being led by cousins.” Of “Avian Circulatory System” Hall notes that “although its tone is ‘just talking,’ it keeps its mysteries alive by explaining nothing as it rolls. Its revelation (reminder) is that blood is a wider issue than the Old Testament’s ‘begat.’ Blood as the itch of migration . . .”

As this contest comes to a close, I’m pleased to announce a new creative nonfiction contest, which is now open and will be judged by Marcello Di Cintio. If you’re feeling inspired by this issue, by Marcello or by our all-CNF issue last fall, you can enter either by mail or on our Submittable page. Meantime, congratulations to all the winners of this year’s contest as well as to everyone who entered. Courage!