From The Stanzas: Rooms by E. Alex Pierce 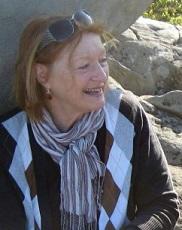 From The Stanzas: Rooms

What were they doing. Alone in that old house. She’d left him there, said nothing, she
hardly knew him yet. There is only so much time. When you’re in it—it seems like forever.
Daddy’s gone a-hunting. And now he’d put his foot in the snare for her and save her neck. His

face began to blotch with the redness of strife, his worry. Then she made a fire in the stove,
they unwrapped their feast, and the gods of beauty and entrapment, and liberation, and
silence, and pure uncontaminated joy came upon them—And The Beast, her Huntsman,

burst through the front door. His truck. Across the road. By the barn. His boots, so loud.
His sweaters and jackets in the trunk in the front hall. Already a new world in the kitchen.

But she was not. His sleeve, his arm at an angle on the pine wooden table. His
gaze. And not one word. As The Huntsman exploded, hauled up a chair
between them, a little away: the triangle, angle of the triangle
in place. John the Baptist come to proclaim from the desert—

Honey and locusts. A man in pain. They might have gone undetected for a very long time,
until she’d said, ‘If you want to see me as I really am, we’ll have to go to the house. At
Sable.’ And she made the plans like a pro, said she’d meet the plumber, mid-week, get
the work started, not afraid to stay there alone. And then she packed. Everything. All her
clothes, diaphragm, shampoo, the photographer’s shirt she’d said was Sarah O’s. The

whirlwind. She had not faced her truth. The way he cut his eggs-on-toast. Silent.
Parallel lines across, and then at right angles, again. The way he’d thrown her
(she was willing) on the kitchen floor at Pentz every night after dinner. The photo
she called ‘Desdemona,’ dead on the bed, the blue satin dressing-gown with
magenta pink trim. The night he’d put his foot on her neck. And

meant it. She was betrothed. Her house, dowry. Her father addressed this man
directly now, by-passed her. Just as he brought her wood, her other grandmother’s
chairs—for the house down the road—his allegiance changed. This builder’s

sense of rightness, entitlement, his will to stop her flight. All summer long. Birds,
dead birds against the windscreen of the VW Beetle, pea-green. Hers.
And now it’s in the driveway at Tangmere and she—

In this last hour—has been called ‘whore,’ ‘strumpet,’ ‘faithless,’ ‘cunning,’ one
who’d give up everything. For a fuck—or so he thinks. Stillness is her weapon. Has
always been her weapon. Silent. Immobile. In the trap. The situation is reversed.

How she knows she does not know. There is a plot. And her Emilia’s faithless—wants
her caught. Knots design a path—of thorns. Apples redden, dark unwinds the night. She
stands upon a bridge. Another story. It’s to herself she’s faithful. Something shines inside

her face. This one who stands beside her. Sees her. Artist, singular, he sees her, not
an aspect of himself or even of his longing. The thing that no one wants her to become.

She swims into her firmament. Meets him. In the frame. And now the bridge: Ah! non
credea mirarti, I did not believe…Read this—as the bride who crosses to herself. Read

this—as the return. Both then—And now. His gift—to protect her. Of course,
though not of necessity—she will fly away. But we are not there yet. She stands

on the bridge. On the tightrope across the chasm. And he does not waver. Nor
does she. In the kitchen, before the pictures. In the moment—she faces
her attacker, holds her ground. And screams. A voice. She has a voice.

E. Alex Pierce is the author of To float, to drown, to close up, to open (University of Alberta Press 2020) and of Vox Humana (Brick 2011). As Senior Editor at Boularderie Island Press, her most recent publications are Aubade: Poetry and Prose from Nova Scotia Writers (Ed. 2018) and Salt and Wild: Shelburne County Anthology (Ed. 2019).