Stretching the Snowy Pages Toward May Flowers 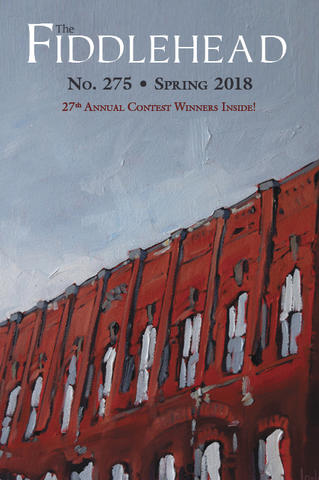 How can you not love Sweden? They have such simultaneous precision and poetic fog. Spring is defined as the first time the average daytime temperature rises above 0 degrees Celsius for seven consecutive days. So spring arrives all over Sweden on different days! Oh Canada. Is it our lot to call spring March, April and May? Surely we can join the CBC rebellion: “But in parts of Canada, spring doesn’t start until April, or even May!”

Thank goodness The Fiddlehead is flexible. Pick up the gorgeous spring issue and you can bend its soft pages this way and that, pulling an early spring toward you or stretching the snowy pages toward May flowers. Here in Fredericton it is the time of March blizzards. The terminology of the Government of Canada provides lush descriptions: freezing rain, freezing drizzle, snow grains, ice crystals, ice pellet showers, snow showers, snow pellets, ice fog, or blowing snow. The Fiddlehead, in its spring issue, in the pages of its superb writing, can encompass all this, as well as spring showers, tulips, and pilgrims riding to Canterbury.

We have arrived in the turn of seasons to our contest issue. The judges work so diligently and thoughtfully in making their decisions, so I would like to give my thanks to Kerry Lee Powell, our writer-in-residence at University of New Brunswick this fall, for her careful attention to the fiction, and to our panel of poets, Jennifer Houle, Sonnet L’Abbé, and Sachiko Murakami, for their astute consideration of the poetry.

Fiction winner Kate Osana Simonian’s “The Press” is the story of a wife who is profoundly depressed and a stoic husband who feels a duty to help her recover. She is a visual artist who enjoyed working with block prints, so with his limited carpentry skills he builds a press in their basement. She seems to recover, but he finds she is using the press for dark reasons, and makes the decision to join her. Kerry Lee Powell notes: “On the surface this offbeat, highly original story explores the secret lives of couples and the drastic lengths we’re willing to take to stave off loneliness. Part modern horror, part love story, its macabre twists are delivered with wit and tenderness.”

The honourable mentions are Samantha J. Macpherson’s “The Fish and the Dragons” and Kate Timmers “The Wet Nurse Late of House Karenin.” “The Fish and the Dragons” tells of a young man coming from rural China to the west coast of Canada, though it is not a typical immigration story. Powell speaks of its “deft intertwining of magic realism, fairy tale elements and the grinding realities that drive many to seek their fortunes in new lands.” Powell says of “The Wet Nurse Late of the House Karenin” that it is “written with grace and flourishes of contemporary humour,” and it “presents a vivid and lyrical meditation on motherhood, loss, and, in keeping with the spirit of Tolstoy, an awareness of the exploitation and misery that lie beyond the upper-class tableaux of literary fiction.”

The winner for poetry this year is Matthew Hollett’s “The Day after the Best Before,” a poem that evokes the ennui of a crowd watching a sunset in Halifax. Sachiko Murakami points to how “The crowding metaphors jostle against each other like the strangers in the crowds, so many little explosions like the fireworks they’re all waiting for.” Sonnet L”Abbé adds: “The seething in this poem is very controlled. Given the recent stories of nationalist sentiment in Halifax, the cynicism of this poem feels urgent and timely. The poem is allusive, smart, and restrained.”

Conor Mc Donnell’s “Qui vincit? (medicamina)” and Conyer Clayton’s “Recurrent” are the honourable mentions. Jennifer Houle states of “Qui vincit” that “written in long, loose couplets, this poem is at once meditative and shocking, juxtaposing the harsh realities of lives lived within a cold, harsh, industrial economy long since gone bust, the aftermath of a culture in which workers are susceptible to cancers, piss-tested and finally expendable, just ‘meat,’ with the escape of drugs — seemingly opioids.” Murakami notes of “Recurrent” how “we are carried through the earth’s long history, touching so much; the poem catches hold of the strands of so many whats and wheres, connecting us to water, earth, the river made mountain made river.”

I am always impressed by the sheer range of voices and styles submitted to our contest, and how it attests to the intelligence being expressed in Canadian literature today. I enjoy the discoveries we make in this issue.