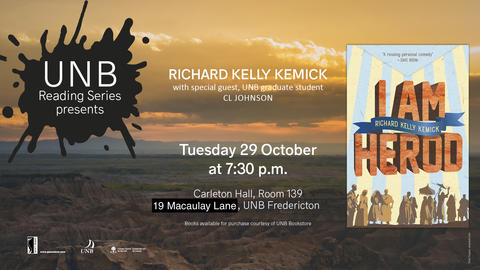 The University of New Brunswick invites you to join us for a literary reading by author Richard Kelly Kemick, with special guest CL Johnson, on Tuesday, October 29th at 7:30 pm in Carleton Hall, room 139 (19 Macaulay Lane) on UNB’s Fredericton campus.

Richard Kelly Kemick is an award-winning Canadian poet, journalist, and fiction writer. His new nonfiction book, I Am Herod, takes readers backstage and undercover at one of the world’s largest religious events. Kemick is also the author of Caribou Run, a collection of poetry, and is the recipient of multiple awards, including two National Magazine Awards and the Writers’ Guild of Alberta’s 2019 Howard O’Hagan Award for Best Short Story.

Currently based in Fredericton, CL Johnson is a poet and musician from Brooklyn Park, MN. Their chapbook, culminate/knot, was recently published by Anstruther Press.

This event, sponsored by the UNB Department of English, Goose Lane Editions, the UNB Bookstore, and The Fiddlehead, is free and open to the public.