Poets Nick Thran and Ian LeTourneau will be reading from their most recent works Wednesday, February 15th, 8 pm at The Galleries in Memorial Hall.

Ian LeTourneau is the author of Terminal Moraine (Thistledown Press 2008) and Defining Range, (Gaspereau Press 2006), a chapbook. He is poetry editor of The Fiddlehead, associate poetry editor of Goose Lane Editions, and frequent contributor to CBC as the local books columnist. His book reviews have appeared in magazines across the country, including The Malahat Review and Books in Canada. He lives on the north side of Fredericton with his wife and son.

Nick Thran is the author of two books of poetry: Every Inadequate Name (Insomniac) and Earworm (Nightwood). His most recent collection, Earworm, blends a pop culture sensibility with formal experimentation and a whimsical sense of humour. Earworm, published in 2011, explores topics ranging from Picasso's Blue Period to the conceptual sculpture of Dennis Oppenheim and the natural world. Nick Thran's poems have appeared in Arc, The National Post, The Walrus, The Fiddlehead, and The Malahat Review, among others. Thran grew up in Western Canada, southern Spain, and southern California. He has spent the last few years living in Toronto, Ontario and Brooklyn, New York.

The reading is presented by the UNB English Department, the Canada Council for the Arts, the UNB Fredericton Bookstore, and The Fiddlehead. 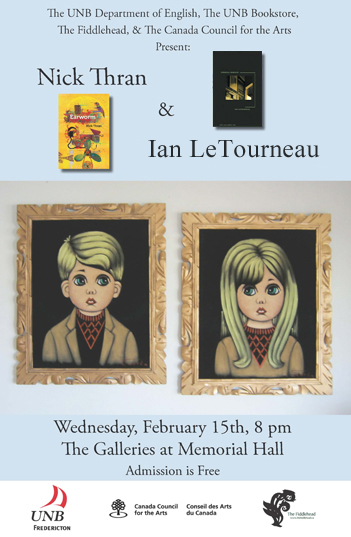