Poet, novelist, and short-story writer Steven Heighton will be reading from his new novel, Every Lost Country, on Wednesday, November 23rd, 2011 at 8 pm in the Alumni Memorial Lounge. 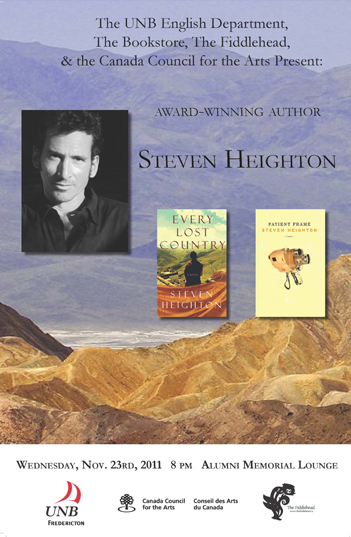 The novel, Every Lost Country, and the collection of poetry, Patient Frame, were published to acclaim in 2010, and a collection of his writing, entitled Workbook: Memos & Dispatches on Writing, is forthcoming in 2011 from ECW. His most recent novel is the story of Lewis Book, a politically strong-willed doctor, who travels to Nepal with his daughter to join a climbing expedition. When the travellers encounter a group of Tibetan refugees attempting to evade Chinese soldiers, Lewis intervenes. He and Amaris, another member of their expedition, are caught up in the events and captured by the Chinese soldiers. The climbers are forced into dangerous circumstances as they work desperately to help their companions. The novel has recently been optioned for film by Rhombus Media.

Steven Heighton is the author of three novels, Shadow Boxer (2000), Afterlands (2005), and Every Lost Country, as well as five books of poetry, including The Ecstasy of Skeptics (1994), Address Book (2004), and Patient Frame (2010). Heighton has received the National Magazine Award gold medal for poetry and fiction, was a finalist for the Trillium Award and the Governor General's Award for Poetry, and received the K. M. Hunter Award for literature.
Most recently he has received the 2011 P.K. Page Founders' Award for Poetry from the Malahat Review for the poem "Jetlag" which is included in his collection Patient Frame.

The reading is presented by the UNB English Department, the Canada Council for the Arts, the UNB Fredericton Bookstore, & The Fiddlehead journal.

Admission is free and all are welcome to attend.
Tags:
stop-look-listen
whats-up