Posted on January 9, 2012
Holly Luhning will be reading from her new novel, Quiver, published by HarperCollins Canada, on Monday, January 16th at 8 pm in the Alumni Memorial Lounge at UNB. 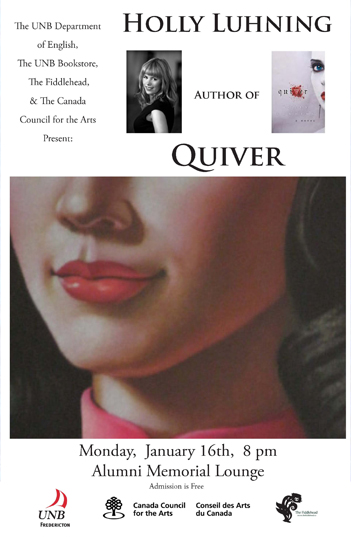 Quiver, Luhning's first novel, is the thrilling story of Danica, a forensic psychologist from Canada who works at the Stowmoor Hospital in London, England. Danica is drawn into a strange, gothic landscape by her celebrity patient, Martin Foster, who is convicted of branding and murdering a teenage girl, and by her glamorous friend, Maria, who arrives in London for archival research. Both figures have connections to the sixteenth-century Hungarian Countess, Eizabeth Bathory, who famously tortured and killed over six hundred young girls in order to bathe in their blood. Bathory believed the bloody ritual would preserve her youth and beauty. As Danica's fascination with Bathory develops she is compelled to explore a dangerous world of violence and obsession that ultimately questions what she is willing to risk to satisfy her attraction to the legend.

Holly Luhning is a graduate of the UNB Creative Writing MA programme, and later completed a Ph.D in the literature of 18th-century madness and theories of the body. In addition to her academic writing, Luhning has published two books of poetry, Sway (2003) and Plush (2006), and has received a Saskatchewan Lieutenant Governor's Arts Award. Quiver, Luhning's debut novel, was described by the National Post as "fast and wicked and dark," and is a Globe and Mail Top 100 pick for 2011.

The reading is presented by the UNB English Department, the Canada Council for the Arts, the UNB Fredericton Bookstore, and The Fiddlehead.
Admission is free and all are welcome to attend.