Award-winning author and filmmaker David Bezmozgis to read at UNB

Award-winning author and filmmaker David Bezmozgis will be reading from his Giller Prize long-listed novel, The Free World, at the Galleries in Memorial Hall on Tuesday, October 4th, 2011 at 8pm. 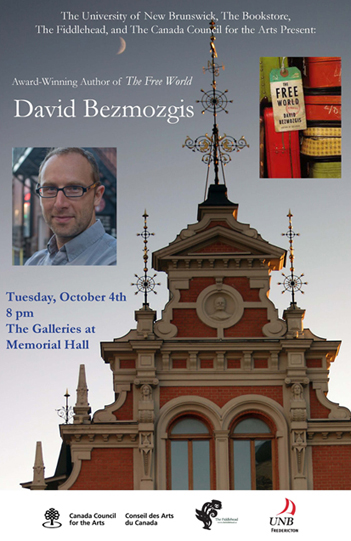 David Bezmozgis was selected by The New Yorker as one of the twenty writers of fiction under forty years old most likely to be a major writer of his generation.

Latvian-born Canadian Bezmozgis received acclaim for his first collection of fiction, Natasha and Other Stories (2004), which was a New York Times Notable Book, one of the New York Library's 25 Books to Remember for 2004, and was nominated for the Guardian First Book Award (UK), the LA Times First Book Award (US), and the Governor General’s Award (Canada) and has been translated into fifteen languages. Bezmozgis' stories have appeared in many publications, including The New Yorker, Harpers, Zoetrope All-Story, and The Walrus.

Bezmozgis developed his first feature film, Victoria Day, at the Sundance Labs and it premiered in competition at the 2009 Sundance Film Festival, subsequently receiving theatrical release in Canada and a Genie Award for Best Original Screenplay.

The Free World was published in April 2011 in Canada, the U.S., the U.K., and Holland. It was announced as a selection for the Giller Prize long list on September 6th, 2011.

The reading is presented by the University of New Brunswick English Department, the UNB Bookstore, The Fiddlehead, and the Canada Council for the Arts. Admission is free and all are welcome to attend.