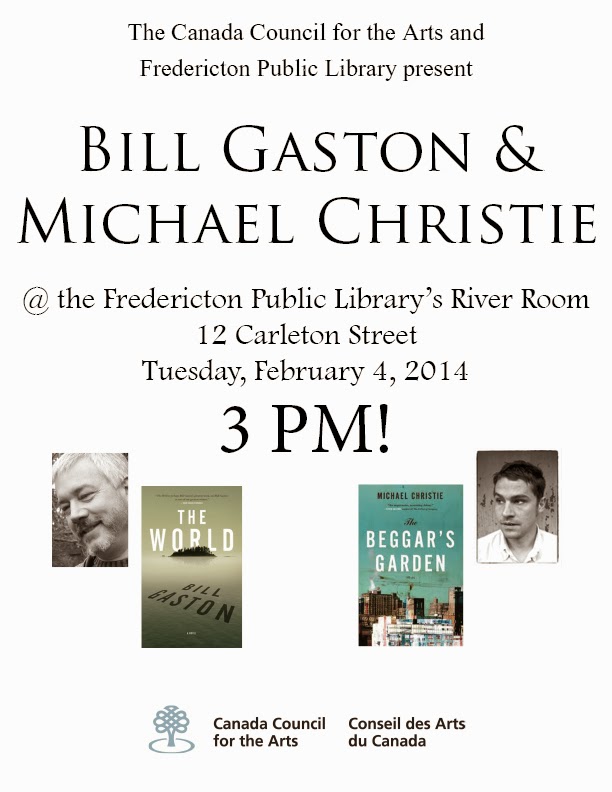 Bill Gaston and Michael Christie will be reading at the Fredericton Public Library next Tuesday afternoon, February 4 at 3pm.

Bill Gaston is the author of 12 books of fiction, several of which have been nominated for awards including the Governor General's Award and the Giller Prize, among others (he's also published a book of poetry, a book of non-fiction, and a play). The Globe & Mail has said, “Given Gaston’s body of work, he merits elevation into the leading ranks of Canadian authors. His writing is gentle, humorous, absurd, beautiful, spiritual, dark and sexy. He deserves to dwell in the company of Findley, Atwood and Munro as one of this country’s outstanding literary treasures.” He comes to Fredericton with his latest, The World, published by Hamish Hamilton.
Michael Christie is the author of The Beggar's Garden, a collection of short fiction published by HarperCollins. The book — his debut — won great acclaim: it was long-listed for the 2011 Giller Prize, shortlisted for the Rogers Writers' Trust Prize, and won the Vancouver Book Award. It was also named one of Amazon's 10 Best Books of 2011: Canadian Fiction, and one of Quill & Quire's Top 5 books of 2011. Steven W. Beattie says, "In Christie's hands, the Downtown Eastside becomes every bit as thriving and alive as Richler's St. Urbain Street or Michel Tremblay's Plateau-Mont-Royal. The Beggar's Garden takes the pulse of history by unsentimentally dramatizing the way a certain segment of society lives now, and in so doing stands as a sympathetic and compassionate examination of modern urban loneliness and disaffection."
The event is free and all are welcome. Thanks to the Canada Council for the Arts and the Fredericton Public Library!
Tags:
stop-look-listen
whats-up