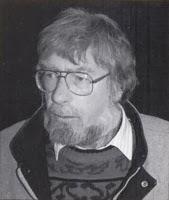 Al loved fellowship and improvised social occasions.  He had a way of  making ordinary shared experience a kind of celebration, something memorable. Inside him there was a bright-lit house party going on in the midst of endless night. Newfoundlanders, especially those from outport and small island communities, have (or had) a special awareness of the bottomless darkness surrounding us and the need to counter it with courage, wit, skill and ceremony.

I was fortunate to meet Al shortly after moving  to Newfoundland in  1975.  My whole experience of  Newfoundland opened through him and his family, through his parents, their stories and the times I spent in their generous company.  I can’t separate these poems of Al’s from my memory of Al himself and the times when I first read them or heard them.  They’re all charged with emotion for me, my own nostalgia, pleasure and sorrow now added to the nostalgia, pleasure and sorrow that Al wove into them.  In “Boxing the Compass” there’s Al’s father, tanned and bare-chested in his captain’s cap at the wheel of the Kyran.  And later, there are the Kyran’s timbers rotting in the grass.

Al looks back on his childhood, on the vestiges of his ancestral home in the same way that he looks at last evening’s party in Crawley’s Cove — both romantically and honestly.  He’s not trying to forge either a heroic cultural myth or a personal myth.  He’s celebrating life, living it as fully and attentively as he can, while it passes.

John Steffler was the Poet Laureate of Canada (2006-2008) and taught for years in the English Department at Memorial University's Sir Wilfred Grenfell College.  His poetry works include That Night We Were Ravenous and Lookout.