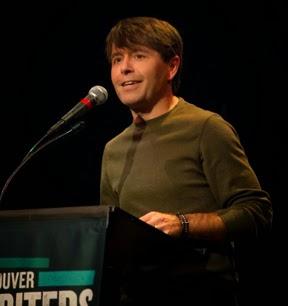 CBC’s “Sunday Morning” the week before Christmas spent its last hour talking about the poetry of Seamus Heaney. The Harvard luminary Helen Vendler, in an attempt to explain how Heaney refreshes her belief in poetry, talked of “the boldness of his subject matter” and “the ravishing charm of the language.” Add to these touchstones a third, articulated by Paul Muldoon in his eulogy to the great man.  He said that Heaney’s poetry had the ability to make a reader feel connected, not only to the poet himself but to each other. I can apply those three qualities with no hesitation to the poems of Michael Crummey, whom I would guess, has read the Irish master carefully and learned from him.

One of the things I admire about Michael Crummey’s work is his nod to traditional forms and the iambic pentameter line. They extend his long reach into the past, yet his poems feel innovative and new because of the subject matter and the toughness and tenderness of his voice. Add to that the remarkable precision of his attention and you know you are in for what the best of poetry can give you. He draws me, a woman from the prairies and the West Coast, into life in the boats and houses and schoolyards of Newfoundland. His images are radiant in their clarity; in the poems included in this anthology you’ll be brought up short by lines like this: “men walked off ice floes to the arms / of phantom children, wives: of fires // laid in imaginary hearths.” His metaphors feel necessary and true: a man, just buried, has eyes “coppered to a close.” Finally, his skill at half-rhymes is extraordinary. “Fox on the Funk Islands” shows how subtle this rhyme can be yet still sound the grace notes found in such word pairings as “pan” and “season,” “tasty” and delicacy,” “meal” and “kill.” Here is a poet, indeed, who refreshes and renews my belief in poetry.

Lorna Crozier's latest book is The Book of Marvels: A Compendium of Everyday Things. She is a Distinguished Professor at the University of Victoria, an Officer of the Order of Canada and a lover of cats and gardening.