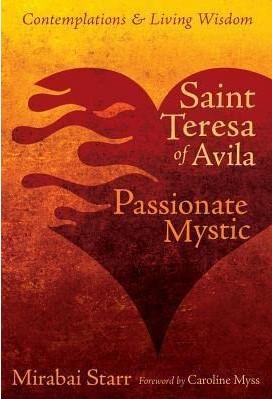 When my doctor told me that she thought Saint Teresa of Avila had schizophrenia, I was curious to learn more. As someone who experiences alternative realities and has been diagnosed with schizoaffective disorder, I am drawn to learn about mystics whose voices and visions are valued. Mirabai Starr's Saint Teresa of Avila: Passionate Mystic drew me into the world of a Spanish mystic who was both persecuted and venerated, and whose life contained great suffering and tremendous joy. Starr invites the reader into the teachings of a woman who was thought to have died and come back to life, and who was familiar with otherworldly agony and ecstasy. Her writings about union with the Beloved can be seen as transcending a particular faith practice. While I am not Catholic, as I read this book, I found myself drawn into a deeper intimacy with what I clumsily call Spirit.

Starr frames Teresa's words with a sensitivity and care that comes from her own deep relationship with Teresa. She shares the story of a woman who defied many of the conventions of her time, while also forging a respected place within them. When I contemplate Teresa, there is no need to ask if she experienced what is now called mental illness. Her suffering is as ineffable as her grace. And as I hear her words bring to life both rapture and rupture, I cannot pry mysticism from madness. Was it Teresa's capacity to dissolve boundaries that allowed her to know a great love of the Divine? What emerges is not a portrait of impenetrability, but a sighting of a mystic who was transparent about her flaws and obsessions. Her honesty about her own struggles draws me deeper into my own brokenness, and I glimpse the value in what is often called a mistake.

When your heart was struck with a flaming arrow, was it an angel, an angel? And we who are called maladjusted, do we perhaps share in that fire? Tell me, sister, of that great burning. You who were spared from a witch's trial, you who knew ecstatic agony, speak to me of what it is you saw, when your eyes fluttered open into the light. No, no, tell me nothing more. Leave me to my longing. So, that when the doors are flung open, I have no need to ask, is it an angel? is it an angel?

Carol Krause is a poet who writes about madness, mystical mishaps and unexpected mendings. Her poetry was recently published in filling Station, Understorey Magazine, carte blanche, CAROUSEL, Issue 286 of The Fiddlehead and PRISM international. Carol lives on disability support and poetry, and feels most alive crawling through caves.