Author Antanas Sileika will be reading from his new book Underground on Tuesday, October 25th 2011 at Alumni Memorial Hall on the UNB Fredericton Campus.

Antanas Sileika is the author of four novels, including Dinner at the End of the World (1994), Buying on Time (1997), Woman in Bronze (2004) a Globe Best Book of 2004, and Underground (2011). Sileika is the artistic director for the Humber School of Writers in Toronto, and is a past winner of a National Magazine Award. 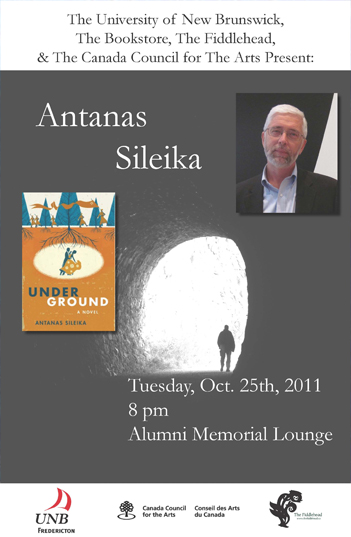 Sileika's new novel, Underground (Thomson Allen & Son, 2011), is the dramatic historical tale of Lukas and Elena, members of an underground Lithuanian resistance movement during the period of Soviet rule. A violent confrontation with a room full of Soviet government workers during their engagement celebration turns Lukas and Elena into folk heroes for their political cause but forces them to flee punishment for their part in the massacre. Lukas and Elena are separated during their escape which forces Lukas, believing Elena killed, to leave the country for a new life in France. A crisis in his home country throws Lukas' new life into disarray and he is thrust back into the fight for his life. The thrilling circumstances of Underground are based on true historical events and elements of the author's family history.

The reading is presented by the UNB English Department, the Canada Council for the Arts, the UNB Fredericton Bookstore & The Fiddlehead. Admission is free and all are welcome to attend.