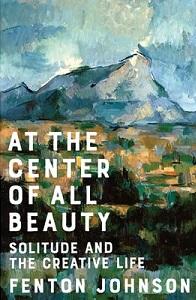 I have long been a fan of Fenton Johnson’s beautiful prose memoirs, and that extends to his exquisite and profound meditation on solitude and the creative life, At the Center of All Beauty, published by Norton this spring.  The title is taken from Cézanne, who spent the last decades of his life in Provence painting in his remote studio “at the center of all beauty.”  Each chapter of At the Center is a contemplation of a different artist’s relationship to being solitary and to pursuing their art.  There are delightfully evocative memoir-chapters about Johnson’s childhood growing up in the deep hill country of Kentucky near the Abbey of Gethsemani, where Thomas Merton (a family friend) was a monk.  Seamlessly, Johnson weaves his own story into a consideration of being solitary and Catholic, closer to the contemplative tradition in Christianity, and eventually, exploring Buddhism’s version of that tradition. Ensuing chapters on Thoreau, Dickinson and Whitman, Cézanne, James, Tagore, and Zora Neal Hurston shaped my first weeks of “sheltering in place.”

At the Center is not a comfort so much as an inspiration. In the suddenness of enforced isolation, these chapters soothed me with the luminous surface of Johnson’s prose, like the deepest and coolest waters of a mountain lake near dusk.  They entranced me with the steady focus of attentiveness—like Dickinson’s proverbial gold thread—on the value of being alone (that is, not lonely but sufficient to oneself), open to the wide expanse of time and imagination devoted to creating something of lasting value, something that isn’t dashed off but carefully made.  There’s a fascinating discussion of a great (maybe great-great) grandmother’s spatula he has inherited, the kind of wood it was carved from, and the beauty of its usefulness, which changed my thinking, literally, about family heritage. (I do have a rather old collection of Swedish recipes put together by my grandmother’s Lutheran church in the 1950s, full of recipes for Swedish delicacies like Lutfisk and Kjotboller, which I shall now cherish!)

Johnson’s last chapter is really a manifesto for solitaries.  Johnson writes that with enough solitude, as well as “reverence and diligence and selflessness,” we may perceive the “underlying harmony” in nature.  In the ensuing silence, he notes, we can hear the trees “singing of a solitude that admits no loneliness.”

Cynthia Hogue has published nine poetry collections, including Revenance (2014) and In June the Labyrinth (2017). Her co-translations include Nathalie Quintane’s Jeanne Darc and Nicole Brossard’s Lointaines (forthcoming, Omnidawn), both with Sylvain Gallais. She is the Inaugural Marshall Chair in Poetry Emerita Professor of English at Arizona State University. Her poem after the war the house lay in ruins will appear in the upcoming Summer issue no. 284 of The Fiddlehead. Click here to subscribe!