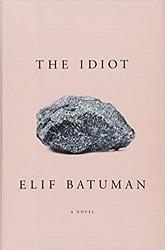 Elif Batuman’s The Idiot is a light-hearted novel set in the early 90s, when email was a new phenomenon. The book is semi-autobiographical, detailing a young woman’s first year of university, first experience of love, and the process of realizing that she is a writer.

The novel is somewhat epistolary, comprised, in part, of an ongoing email exchange. It’s also a work of metafiction; it parallels, then diverges from, the rather odd love story, Nina in Siberia, that the narrator reads, chapter by chapter, for her Russian class. The narrator, Selin, doesn’t venture to Siberia, but spends her summer teaching in a small Hungarian village.

Batuman’s writing is seamless, interspersed with precise and unusual descriptions; the images and emotions are vivid. Selin’s lines of inquiry about linguistics and the nature of relationships are engaging and endearing.

In the endnotes, Batuman explains that the book took so long to write that it “became an historical novel.” (I was surprised to realize that a novel set in the 90s would now fit that definition.) I’ve also seen it described as “a portrait of the artist as a young woman,” but I find that description too generalizing for such a unique character and storyline.

This novel is a restful, intriguing, escapist read. But I don’t recommend listening to it as an audiobook. The pacing is slow, due to the many email exchanges, details of daily life at university, and a fair amount of dialogue; it works much better when read on the page.

The Idiot was a finalist for the Pulitzer Prize in 2018. I read it on a friend’s recommendation, so often the best way to find one’s next great book.