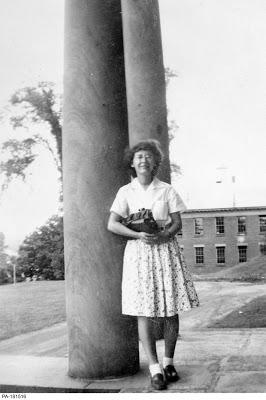 There will be a special memorial for Elizabeth Brewster next week to acknowledge her special connection to the University of New Brunswick and her literary legacy. It will take place at 4pm on Wednesday, April 24 in the Alumni Memorial Building, 13 Bailey Drive on the UNB campus in Fredericton.

In The Fiddlehead's spring issue, due back from the printers very soon, we commemorate Brewster's career by reprinting several of Brewster's early poems that appeared in The Fiddlehead. Also appearing in no. 255 is a thoughtful essay about Brewster written by current UNB graduate student Chasity St. Louis. We're pleased to reproduce Chasity's piece, "Where We Come From: Elizabeth Brewster's Literary Legacy" here.

Elizabeth (Betty) Winifred Brewster passed away December 26, 2012 at the age of ninety. An early member of the Bliss Carman Society, she contributed greatly to the founding of The Fiddlehead. Her death marks nine decades of literary involvement and excellence.

Brewster was born August 26, 1922 in the small logging town of Chipman, New Brunswick. Delivered by one of her grandmothers and given the name of the other who was on her deathbed at the time of her birth, she had a less than prosperous early childhood. Both of her parents were unemployed at the time of her birth, and the family lived a fairly nomadic lifestyle, migrating from one relative’s home to another until her parents found better paying positions at an army canteen during the war.

Brewster was kept out of school for a few years because she was physically frail and considered to be intellectually behind. However, this did not get in the way of her own personal education. An avid reader from a young age, she read anything, from literary classics to the pages of the Eaton’s catalogue, even epitaphs on grave markers when other material was unavailable. Brewster began writing poetry around the age of nine or ten. Her burgeoning talent did not go unnoticed — when she was only twelve, one of the poems her father submitted to Saint John’s Telegraph-Journal was published.

Her entry into the academic world was due in part to her friend and mentor P. K. Page. The two became acquainted when Brewster won a poetry contest that Page judged in 1940. Page encouraged Brewster to attend the University of New Brunswick, where she earned her first of four degrees in 1946. She also received a Masters in English literature from Radcliffe (1947), a Bachelor of Library Science from the University of Toronto (1952), and a PhD from Indiana University (1962).

During the 1940s she played an integral role in the burgeoning Fredericton literary scene and her poetry career began to take off. One of the few female Canadian modernist poets to be published during the time period, she was also one of the first members of the Bliss Carman Society, which included Alfred G. Bailey (its founder), Allan Donaldson, Fred Cogswell, Frances Firth, Donald Gammon (The Fiddlhead’s first editor), Robert Gibbs, Desmond Pacey, and A. Robert Rogers.

The society, founded by Bailey in 1940, served as a sounding board for members to discuss ideas about poetry and critique each other’s work. Its goal was largely to contribute to the emerging modernist tradition by following the lead of poets such as T.S. Eliot and W.B. Yeats. The society was a means for members to develop their unique poetic voices, and it encouraged and provided ample opportunity for experimentation. Games that played with rhythm, meter, and form were a common feature of the meetings. The Bliss Carman Society led to the formation of The Fiddlehead, which initially served as a record “largely for private circulation among members of the Society and their friends.” Members discussed which poems were to be included in the journal and saw it as a way to track their successes as “practicing writers of verse” (Bailey, The Fiddlehead, no. 1).

Brewster’s unsettled early years were mirrored in the first decades of her adulthood, where, after Fredericton, she moved often in order to find work. She taught school in Ontario and worked as a secretary and librarian when she was unable to find an academic position. She taught briefly at the University of Victoria and was finally offered a faculty position at the University of Saskatchewan in 1972, where she taught until 1990. She went on to receive an honorary doctorate from the University of New Brunswick in 1982 and a Lifetime Achievement Award for Excellence in the Arts from the Saskatchewan Arts Board in 1985. She was twice shortlisted for the Governor General’s Literary Award. In 2001 she was inducted into the Order of Canada.

With over two dozen works to her name, Brewster leaves behind an impressive literary legacy. Her early poetry, although modernist in style, is slightly more conservative in form and is composed of rhyming metered verse. Although she writes almost exclusively in free-verse later in her career, her poems retain a substantial amount of structural control and shaping. She makes use of colloquial diction and plain and straightforward language. Her down-to-earth language serves as a medium to communicate remarkably complex and intricate ideas with precision. For example, what begins as a seemingly lighthearted nature poem turns into a reflection on human insignificance and mortality.

Only the subtle things,
The slender, still things stand;

The heavy mountains crumble down
To fluid waves of sand;

The medalled heroes die,
The shouting millions pass,
And on their sunken graves there grows
The mute, tenacious grass.

Brewster has been hailed by John Robert Colombo as a master of understatement. Much of her poetry explores philosophical ideas that verge on the metaphysical, as is particularly evident in poems such as “The Egoist Dead.”

Eternity, that seemed to stretch
Elastic-like at his command
Finds a neat and compact space
In the hollow of his hand.

Poems that are set in her rural New Brunswick birthplace feature prominently in her collections. “Where I Come From” evokes the Chipman area with its

However, as many, including fellow Bliss Carman Society member Desmond Pacey, note, this reliance on memory is not nostalgic or sentimental. Rather, it is honest and complex. In this way, her poetry does not allow the Maritimes to conform to the essentializing conception of the region as a peaceful rural idyll. Her poems often explore universal themes of loneliness and loss, love denied instead of love gained, and mental illness, likely stemming from her own struggle with mental health. Many poems have darker, even gothic undertones and present death as the only place of refuge. For example, the poem “Riddle me, Sweet, how you who had . . .” ascribes sensuality to a grave plot.

For though you lived your upper life
In proud virginity
The fat white grubs, your lovers, prowl
Where you luxurious lie

In your incestuous marriage bed,
Safe-kept from wind and storm,
Daughter and sister of the dust
And mother of the worm.

Indeed some of her favoured imagery includes ice, marble, dust, coldness, and stillness.

Many of Brewster’s early poems reproduced here in this spring issue evoke various tensions and contradictions, such as temporality and endurance, permanence and impermanence, stasis and movement, coldness and warmth, and the living and the dead. She presents the relationship between states of being and matter as transitory, fragile, tenuous, and inseparable. The movement between two seemingly opposite states is rendered seamlessly in striking and impressive ways, as in the poem “Do you ever feel . . .”:

The thinning laughter breaks
In brittle, glassy flakes,
Blown out, blown out into eternity

Perhaps the most relevant of these oppositions is the past and present. Brewster and her writing exemplify Bailey’s statement about the employment of tradition found in his introduction to the first Fiddlehead: “By continuing a tradition is not meant a slavish imitation of past themes and methods, nor does it mean a complete break with the past.” Brewster’s work is a testament to the fact that literature and identity itself are a part of a continuum where the borders between past and present are not strictly demarcated or clear. One of her better-known poems, “Where I Come From,” includes the quite topical line for this time of the year, “Spring and winter / are the mind’s chief seasons: ice and the breaking of ice.” There is a solid literary tradition as firm as ice, but, like ice, it must break into new forms, new language, new meaning. In remembering Elizabeth Brewster and fellow members of the Bliss Carman Society, we are reminded that in the recasting of earlier forms, every word written today carries the weight of the past. We must remember where we come from in order to understand where it is we’ve come.