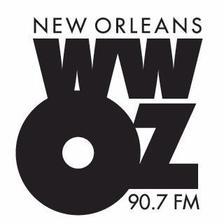 The random and irrelevant nature of radio music is occasionally overlooked. I  remember though doing time and in some cell blocks the radio gained an importance that on the outside and these days and especially maybe these days, cannot be qualified. I never quite got it inside. Country music stations. We’d call that ‘string up’ music, and some guys would. But there was also something eclectic and chance worthy about the radio. Over time, doing time, I think I figured it was maybe also the spontaneity and chance of not knowing what was going to be played next, that these days took me back to the Transistor. I dig not having possession over what’s going down around me, but accepting what is and what might be. Like Pound said, Thank you, whatever comes. And so when I found by chance the radio station WWOZ from New Orleans, albeit on the internet, I got hooked. They do it all: string up music, French acadian, Latin music on Saturday afternoons, Irish. Publically funded independent radio stations. They can play ones out of tune with the times, and for more than 2.5 minutes. Maybe it’s also reading andwriting. I like having something on I didn’t choose, lyrics I don’t know and can’t  sing along to, so that it becomes background and allows a cleanliness of thought to move in. It’s there and you know it’s there, it just doesn’t really matter that it’s there. You’re just thankful for it, for whatever comes.

Gordon Lonethunder is a painter and poet. He holds a bachelor’s degree in Psychology from Athabasca University. Long time tree hugger, tree planter and occasional tree climber, reformed gang member, he spends his off hours counselling young adults at risk. His poems have also appeared in untethered and The Malahat Review. Poetry Daily in the United States reprinted his poem published in the Malahat. He spent the summer of 2019 with the Lacandon Indians in Chiapas, Mexico.