An Interview with Ahmad Danny Ramadan 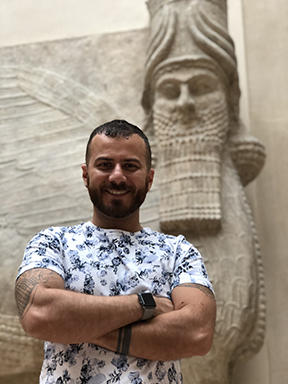 Ahmad Danny Ramadan has won The Fiddlehead’s 28th annual Short Fiction Prize for his story “My Name is Bridge.” The following interview was conducted via email with Editorial Assistant Kendra Guidolin in March/April 2019.

Kendra Guidolin: I’d like to start by congratulating you on winning this year’s Short Fiction Prize; having read many pieces to consider for the contest, I find yours really stands out in my memory. Beginning a piece with a seemingly chaotic depiction of a grandmother and her granddaughter banging pots on a roof in defiance of a sun goddess was playful in its description, but this depiction very quickly evolved into a realized sense of empowerment and agency for both women. And then to finish the piece with a sort of horrific victory for the women in the story was absolutely striking. Did you start this piece with a sense of where it was going to end up?

Ahmad Danny Ramadan: Writers have their obsessions they cannot abandon; I’m obsessed with my history of growing up in Syria, and with my Assyrian heritage and traditions. I grew up with a grandmother who navigated these identities without ever having them clash. That was normal for me back then, and only after arriving in Canada did I realize the uniqueness of that experience. My grandmother continues to be my inspiration in life and in writing. To answer your question more directly: the story was born in stages. The opening scene is a memory of the solar eclipse in 1997, when I was with my own grandmother in Vancouver, and the story grew as an homage to her strength, agency, and resilience. I didn’t know where the story was going when I started it, but I was guided by that realized self-empowerment my grandmother had for herself, and installed in the future generations of our family — in both women and men.

KG: This piece is full of allusions and mysticism that makes some scenes act as a vignette or dream sequence. With the turning point of this piece being focused on the dream Bridge mentions to her grandmother, I wondered: what do dreams mean in this piece? What does it mean when Bridge’s grandmother simply tells her not to dwell too deeply on them?

ADR: In this story, dreams help Bridge navigate the deeper emotions she is unable to negotiate with herself or others around her — either because she lacks the language to do so, or because of the hostile environment around her. I wrote these scenes as a way for Bridge to witness her own growth, to her grieve her grandmother, and to finally find the courage within herself to take care of her mother. If you asked any grandmother from Syria, she would tell you that bad dreams come true when spoken out loud. I think when Bridge’s grandmother asks her not to dwell on those dreams, she is realizing the deeper meaning behind them, and is protecting her.

KG: The protagonist’s name is “Bridge” and actual bridges appear throughout the story. I think that bridging gaps is one of the story’s most prevalent themes — bridging dreams and reality, the public and private goings-on of the family, the stories of goddesses Bridge’s grandmother tells her, and the recurrence of their stories in the events that happen after her grandmother’s passing. Is this where the inspiration behind Bridge began?

ADR: Another obsession of mine is bridges. I think they’re a metaphorical treasure chest. When I wrote this story, I was absolutely thinking about all of the themes you mentioned, but I was also thinking about the foundations on which bridges are built so they can last long amounts of time and carry large amounts of weight. I wondered about how powerful women who live in a society ruled by men have to be, especially when their job is to deliver the next generation. Bridge, the protagonist, is delivered by the agency of her grandmother. She is built up to become the barrier between her mother and the pain inflicted upon her, and the deliverer of her mother’s agency, as well. She connects the two generations of which she is the product and through which she is shaped.

KG: I think the form of this piece itself acts as a sort of bridge, in that the prose is flowing and lyrical, like a mix of prose poetry and fiction, blurring the distinction between forms. Do you think the form of the piece is what brought out the themes in the story?

ADR: I blur the lines between lyrical prose and fiction in all of my work. I think that this style of writing is quite useful for depicting trauma. It allows me to write engaging, emotionally charged stories, while navigating difficult topics like war, abandonment, death, grief, and misogyny (as well as homophobia and racism — topics I’m also invested in writing about in my other work). I like to think that I write with kindness; my characters, and those who have inspired them, have suffered enough, and if I am to tell their stories, they deserve to be told with love.

KG: This story has some devastating and all too real depictions of what often happens to young women in cultures that value sons over daughters. But as haunting as the treatment of women is in this piece, it’s an incredibly empowering story because of the depictions of all three generations (Bridge, her mother, and her grandmother) as women who, although often forced into situations by men, also stand their ground and act with huge amounts of agency and empowerment. Was there anything in particular that inspired you to write Bridge’s story?

ADR: I’m the product of women. I was raised by my grandmother, who taught me how to respectfully navigate the world of women, and her memory is what I draw upon when I need calmness in my life. As well, my personal hero is Radwa Ashour, an Egyptian award-winning writer and professor who took the time to meet me when I was 21 years old. I showed up at her office without an appointment, and she spent three hours helping me with my writing. She remained in touch until her passing in 2014. My mentor, Dara Parker, literally saved my life upon my arrival in Canada, in helping me navigate a new country, and regain my agency after being a refugee. I learned resilience, generosity and mentorship from these women, and they helped shape the man I am today. They didn’t just inspire me to write "My Name is Bridge." They inspired me to write. Every piece I write is thanks to them.

KG: Especially in regard to the story’s ending, I wonder what the image of the bridge collapsing means, especially in combination with the suggestion that the collapse was caused by an unearthly figure, a winged woman, and her thunderbolt. It seems to me as though the final explosion, resulting in the removal of men who degraded and oppressed the women in the story, made the previous explosions mentioned in other scenes appear as a reclaiming of female power.

ADR: I don’t think the bridge “collapsed”. I think the bridge opened its mouth and swallowed those who wronged it. Certain characters do not deserve deliverance, and the bridge and winged goddess watch for when they need to intervene. With all poetic justice aside, the first draft of the story ended without that final scene; it ended with Bridge and her mother waking up by the grandmother’s touch, but the story felt unfinished. I felt that the energy that was born from a moment of female empowerment needed to go somewhere. It felt lurking in the corner of my brain and I think it did manifest itself in the return of the winged goddess, delivering mythological-like justice upon those who wronged Bridge. I enjoy the dynamic of deus ex machina in Greek mythology, and it felt quite fitting for the end of this story.

KG: Are topics like the ones that arise in “My Name Is Bridge” (female empowerment and equal rights, for instance) those that you will continue to have in mind as you write? Or are there other themes you’re also passionate about and hope to express in your future writing?

ADR: I’m currently working on multiple projects that will start appearing in bookstores soon. Salma The Syrian Chef is a children’s book themed with the concept of belonging and navigating the meaning of home and how to reserve it. The Syrian Survival Notebook is a collection of short stories navigating themes of toxic masculinity, homosexuality in the Arab World, female empowerment, and the herd mentality. As well, my follow-up novel The Foghorn Echoes is themed after the healing aspects of storytelling, and the impact of childhood traumas. Syria and the Syrian identity are common ground in all of these projects. (All titles are working titles.)

Ahmad Danny Ramadan is a Syrian-Canadian author, public speaker, and LGBTQ-refugees activist. Since his arrival in Canada as a refugee, he published his debut, award-winning novel, The Clothesline Swing. He is now finishing his Creative Writing MFA at UBC and lives with his husband-in-training in Vancouver.