An Interview with April White 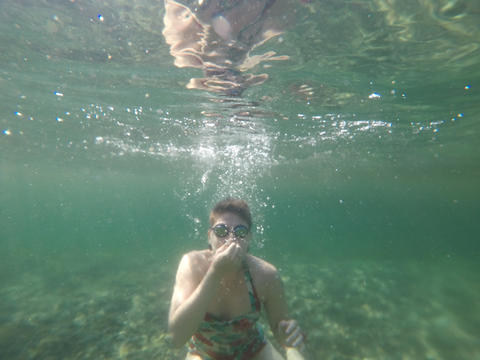 Editorial Assistant Douglas Walbourne-Gough interviewed April White about her illustrations of garbage that accompany Anna Swanson's poetry in their collaborative project, The Garbage Poems. April White's illustration, "A hum at the edge," will be paired with Anna Swanson’s poem, “Portals,” in the upcoming special 75th anniversary issue of The Fiddlehead that will be published in the spring.

Douglas Walbourne-Gough: I love the childhood memories immediately conjured by the image of the Sunlight dish soap bottle—I was amazed that a bottle of soap smelled like lemons! What, if anything, drew you to the Sunlight bottle in particular? Counter to my nostalgic associations, what's it like to encounter such a (possibly iconic) object out of its domestic context, i.e. floating in a favourite swimming hole instead of in one's home?

April White: The Sunlight soap bottle was an item of garbage that Anna [Swanson] found during her garbage collection/research at a particular swimming spot in Flat Rock, Newfoundland. At first she did not know why she was finding dish soap bottles at this swimming hole, but then asked another swimmer who answered that, at waterfall locations like this one, people add soap to the water to generate many bubbles as water crashes down from one pool to another. It’s kind of horrendous for the environment, but also this spectacle that people like to create for themselves, I guess. So that’s how Sunlight got introduced into our range of imagery for The Garbage Poems. More specifically, we paired it with Anna’s poem Portals because of metaphors we found within the poem that could link to the Sunlight bottle. When making this particular image of the Sunlight bottle, I was thinking about doorways and shadows. How shadows cast by sunlight can be like other worlds you can enter into. But I also thought about the visuals of bubbles humming at the edge of a waterfall or at the edge of a sci-fi portal—hence the title of the image, A hum at the edge, which is taken directly from a line in Portals.

DWG: The image comes from the collaboration between Anna Swanson and yourself, The Garbage Poems. Can you speak a little to the other images that emerged from your collaboration with Anna Swanson? Is there any particular image (or images) that are your favourite?

AW: All of the images are from the collaboration, yes, and they are all items of garbage that Anna found at specific swimming holes. And as you may know, she made a database of all the words on the items of garbage to make poems from. I like the idea that all of the garbage is being strangely elevated through being used like this and through being painted. One of my favourite images is this cup from A&W that has the word “dreamy” on it and in the painting, it appears “dreamy.” But in reality, it’s just an orange A&W cup trying really hard to market drinking pop with your burger. Through the poetry and painting, all of the advertising language and inherent capitalism gets subverted through these acts of care and reconceptualization.

DWG: I'm really drawn to the idea of writing about and visually depicting garbage in the realm of art, the subversion of the fine being infused with the refused. What do you glean from the garbage of others and is there anything in particular you hope this project speaks to audiences?

AW: I might have just answered this in the last question. This project creates a very strange but subversive way to think about garbage. It also is a stunning collection of thoughts about swimming, the body, sexuality, and health/illness. If anyone’s perception of these subjects is shifted or slowed down through reading the poems and seeing the paintings, then I think the project is succeeding.

DWG: Can you speak to your collaborative process with Anna? How it came about? Is collaboration something you engage in regularly within your own practice?

AW: The collaboration with Anna started in 2017 and is still ongoing—we hope to publish a book in the future. It all started when Anna saw my solo exhibition called A Day in the Life Of at The Rooms Provincial Art Gallery in St. John’s, NL in 2016. The leaflet for the exhibition has a milk carton, cookie box, and food items on it, and I think she saw these watercolour representations of everyday minutiae and made a “what-if” connection to the garbage she had been collecting over the years. One of my favourite parts of collaborating with Anna is how much we swim together in the summer--it is simultaneously important research and my favourite summer activity.

DWG: This issue of The Fiddlehead is curated around the theme of “looking forward.” What are you currently looking forward to? Any new projects or collaborations on the horizon? Or, conversely, is there anything you're looking back on fondly from 2020?

AW: I’m in grad school right now, doing an MFA at Concordia University in Montreal, QC, so I’m looking at a whole new realm of possibilities for my art practice. I will periodically be adding new creations to my website if anyone is curious... (shamelessly promoting myself). As well, Anna and I are continuing to work on paintings and poems for The Garbage Poems to hopefully become a book down the road.

April White is an artist who works with watercolour, animation, and print media. Her artwork questions societal understandings of vulnerability and control through commonly experienced involuntary actions such as yawning, sneezing, laughing, and crying. She recently moved from St. John’s, NL to Montreal, QC where she is working towards her MFA degree in Print Media at Concordia University. Check out April White's creative work on her website.