An Interview with Charlie Fiset 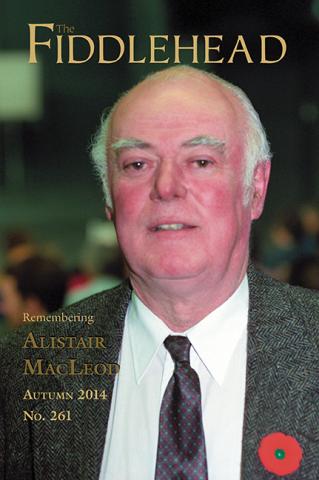 The Autumn 2014 issue of The Fiddlehead, No. 261, features a story by UNB Alumni, and current student, Charlie Fiset. This story, entitled “Maggie’s Farm,” is a fictitious account based on Fiset’s own European travels, imbued with a Greek mythological theme drawn from Homer’s Odyssey. This story was originally part of Fiset’s creative thesis for her MA in Creative Writing.

Charlie Fiset is now in her first year of PhD studies at UNB. Originally from Kirkland Lake in northern Ontario, she has her undergrad degree in Classics and English from Nipissing University in North Bay, Ontario. “Maggie’s Farm” is her first publication.

Fiset was kind enough to offer some insight into “Maggie’s Farm” and her creative process, in response to the following questions.

*   *   *
Greg Brown: What types of stories or works do you like to read, and which ones inspire you?

GB: What types of stories do you like to write?

GB: Does your current dissertation inform your writing at all? And if so, in what way?

CF: My dissertation will be a comparative study of epiphany in the epics of Pound, H.D., and Eliot. I find modern epicists interesting because of the manner in which they consider the history of knowledge; in studying modern epics you’re able to study particular vantages on epistemology since the time of Homer. Pound begins The Cantos in medias res, when Odysseus and his shipmates are leaving Circe’s island. This modernist refiguring of The Odyssey inspired me to refigure my own experiences in an Odyssean frame. I got the idea from Dr. Demetres Tryphonopoulos’ study of The Cantos called The Celestial Tradition.

GB: Could you discuss your inspiration and what made you want to write "Maggie's Farm"?

CF: I quit school when I was 19 and went to Europe on a backpacking trip with the boy I was dating at the time, so the story is based on that. Some of it is true. But not the mule.

GB: The Bob Dylan epigraph seems to be inspiration of a sort. What does that song mean for you in terms of this story?

CF: I was lucky enough to have the input of Mark Anthony Jarman on some of my stories, and he suggested that I call this story “Maggie’s Farm.” I re-listened to the song and found that I could relate some of what Dylan was saying (perhaps about the greed of the American music industry) to the economic and political issues that I (try to) talk about in my story.

GB: At first I thought the character of Margaret might be the Circe type figure from the epigraph, but it could also be read that she's the one transformed. How does The Odyssey epigraph inform the story from your point of view?

CF: Margaret is Circe. Her magical power is the money she hordes. She exploits and degrades her workers, thereby metamorphosing them into sub-human “swine.” She represents a broken capitalist system that’s plagued by near-sightedness: in order to perpetuate a farm, you have to ensure the things living on it are taken care of. Otherwise, nothing works.

GB: Margaret, Diane, and even some smaller characters are named, but the protagonist couple remain unnamed. Could you discuss what led to this creative choice?

CF: This question also came up in my thesis defense. I’m still not sure why I left them unnamed. In the end calling them anything (and giving them particulars like hair colour and characterizing mannerisms) seemed to take away from the story’s themes, which I thought were more important than its characters. Most people who’ve read the story seem to dislike the fact that I called the mule ‘It’ (for grammatical or personal preference reasons). But I wanted to highlight the kinship between He, She, and It, among other things.

GB: Diane is a fascinating character, as she is the only one that remains employed. She seems veiled in mystery and though seems friendly, her 'immortality' on the farm and crassness at the end adds a bit of darkness to her character possibly. How do you interpret Diane?

CF: In a sense Diane represents Western economic sensibilities in that, like the boy and the girl, she’s an outsider looking in. I regret giving her a name that can be confused with a goddess of the Greek pantheon.

GB: Desperation is at constant odds with how much the protagonists are willing to take. Could you discuss the theme of desperation in your story?

CF: One of the many things I learned as a backpacker is that hungry people don’t act (or think) like well-fed people.

GB: There's a lot of technical farm knowledge it seems, and fascinating tidbits about horses. How researched is this story, or perhaps you have a history with farms?

CF: I competed in dressage (an equestrian discipline) on the national circuit when I was a teenager. When I ran out of money in Europe, finding a horse job was the natural thing to do because I had the skill set, and because farms generally aren't picky about whether or not the people they hire to shovel feces have visas. Unfortunately, the first place I was hired offered me a less-than-positive working experience. The next farm was better, but still bad enough for me to write a story about it too.

GB: Margaret is obsessed with 'natural' versus 'unnatural'. Is this a subject that interests you?

CF: Margaret’s obsession has to do with natural horsemanship, which is a wonderful idea but, like all good ideas, is also open to the interpretation of unknowledgeable quacks. Very few people who claim to be natural horsemen attempt to understand horses as horses (through a horsey-lens, not a human one), which is, in my opinion, the only way to really build a rapport with them. Basically, Margaret’s hijacked the natural horsemanship ethic and transformed it into something unnatural, fabricated, like a bad magic trick.

GB: Is it irony that Margaret would purposely breed a mule? Or a deeper reason perhaps? What does the infertility of this 'prize' chattel mean for the story?

CF: For me ‘It’ represents Margaret’s belief that her magical power (i.e., money) somehow gives her the right to manipulate and order the world around her. The mule also signifies that she has no real understanding of the entities she attempts to control – ‘Its’ sterility is emblematic of this impotence.

GB: The protagonist boy is overtly transformed in terms of his anger. Is the protagonist girl shielded from a transformation, or does she transform in a different way?

CF: I would say that the experience is transformative for both of them. The girl didn’t get angry, but she was the one who initially demanded the money (something she wouldn’t have done before becoming acquainted with the fear of hunger). Her transformation was the final incitement for the boy’s subsequent (and more apparent) one.

GB: Margaret is a hoarder (collector) and OCD. Is there a psychoanalytical way to interpret your story?

CF: Margaret’s “collections” symbolize her desire to impose her own idea of order onto the world around her. She may or may not be suffering the effects of mental illness, but she certainly suffers from a hubristic and transgressive character. And because she is in a position of power, the humans and animals under her control suffer as well.

GB: The ending seems to re-set all the characters to where they started (albeit Margaret might be a little more shaken). Do you see growth for our adventuring protagonists or the recluse landlord? Or, what does the ending mean to you?

CF: Metamorphosis is a kind of epiphany. Margaret will keep on ensnaring weary, unwitting travelers who come to her “island” seeking shelter from the storm. The protagonists, however, have a different outlook on life because of their transformation — they’re a little wilier. Another character also gets a new beginning: the runaway mule!

GB: Thanks very much to Charlie Fiset for taking the time to respond to these questions.