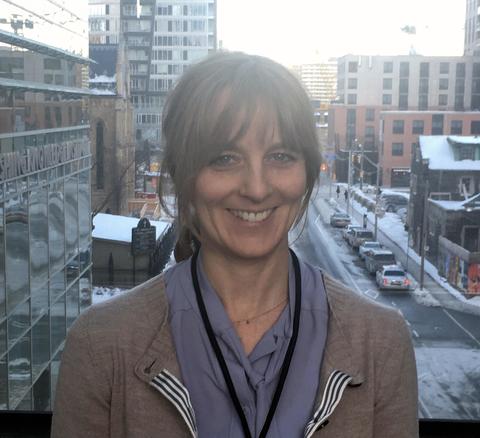 Dafna Izenberg won this year’s Creative Nonfiction Prize for “The Promised Language,” published in The Fiddlehead, No. 281 (Autumn 2019). Editorial Assistant Jaeden Langlois conducted the following interview with Dafna Izenberg about her relationship to the Hebrew language.

Jaeden Langlois: First of all, I want to congratulate you on winning The Fiddlehead’s 2019 Creative Nonfiction Contest with your essay, “The Promised Language.” Part of why the essay is so excellent is that you cover such a wide range of topics in so little space. What threads it all together is your relationship to the Hebrew language. Can you explain why the language appealed to you so much when you were young, and why it continues to fascinate you even now that your feelings toward it have grown more ambivalent?

Dafna Izenberg: Thank you very much. I’ve been a big admirer of The Fiddlehead for several years, so this is really a thrill. I don’t know if I can explain why Hebrew appealed to me so much when I was young—it seems almost non-verbal! There was a lot of love for the language in my family and extended family. I was immersed in it to some extent; half my day at school was spent in Hebrew. Probably my own personality played a part. I liked knowing another “code,” for one thing. I was also very impressionable. I took the biblical stories deeply to heart.

JL: I find the turn in the essay quite powerful. As you get older and your perception of the Israeli state becomes more complicated, so too does your relationship to the Hebrew language. You explore the idea that certain things cannot be expressed in every language, that learning new languages expands our worldview by allowing us to think in new and different ways. On the other hand, all languages carry cultural and political baggage with them, especially a language with a history as long and complex as Hebrew. At one point you ask if Hebrew is even “available” to you. I found this idea very compelling, and I’m wondering if you could expand on what it would mean for a language to be “available” to someone.

DI: I think my meaning there is mostly emotional and wrapped up in my questions about my identity. I read a theory about language that native speakers don’t make grammatical errors. As I understood it, the idea is that the logic and structure of a language is wired into a native speaker’s brain; they understand its rules intrinsically. I’m not wired in Hebrew, but it’s “inside” me somehow—not neurologically but emotionally. Maybe that’s why I “relate” to it, almost like a person. And, at times, almost like an unrequited love.

JL: You do a great job of exploring the relationship between modern Hebrew and the Israeli state. Obviously, this is a unique relationship in many ways, but it also seems to me that it has a lot in common with the linguistic aspect of all settler colonial projects. How is the state of Israel’s relationship to Hebrew similar to (or different than) Canada’s relationship to English and French?

DI: I don’t think I know enough about either history to really compare them. My understanding is that when Jews began migrating from Europe to Palestine at the turn of the 20th century, there was a project to make Hebrew the language that they spoke there. Even when people had Russian or Yiddish in common, they spoke Hebrew to each other. And I think this effort was part of the bigger project to establish Israel as the Jewish homeland.

JL: Finally, you explore your complicated feelings toward your own identity in the essay. You question whether you are truly a non-believer. You point out that, according to a strict interpretation of Judaism’s matrilineal rules, you would not be considered Jewish (and yet, as you also point out, you would have been Jewish enough for Hitler). Do you think you will ever “figure out” these complicated aspects of your identity? Do you think you need to?

DI: Here’s a question I love asking: Can people change? Bring that up at the pub with your friends—the conversation will flow. My own sense is that our identities do change, or maybe that we identify more or less with different ideas or groups over time. But I also find myself believing in the concept of an immutable soul, some “kernel” that makes each of us who we are. As a child I subscribed to the sanctity of certain observances in Judaism, keeping Kosher, for example. I don’t anymore—or at least, I don’t keep Kosher. But the six-year-old who was so aghast when God told Abraham to sacrifice his own son, and so relieved to discover he never actually meant for Isaac to be killed—she’s still in there. And the power that story has over me somehow makes it impossible to say one hundred percent I’m a “non-believer.” So, no, I suspect I’ll never figure it out. Though I’ll probably keep trying.