An Interview with Kate Finegan 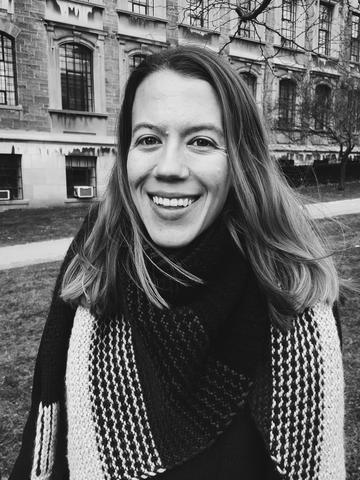 Kate Finegan has won The Fiddlehead’s 26th annual Short Fiction Prize for her story “Blues Too Bright.” The following interview was conducted via email with Editorial Assistant Andrew Ramos in March 2017.

Andrew Ramos: Hi Kate, thank you for taking the time to speak about your story. Could you tell us a little bit about what inspired you to write “Blues Too Bright”?

Kate Finegan: I was interested in the stories that families pass down from generation to generation, and I wondered what it would be like to find out that the most grandiose, unlikely family legend was actually true. I wondered if, after so many years and in the face of the shocks and struggles of life, it would actually matter.

AR: The pacing throughout the piece is fantastic. The mother’s death bursts into the narrative seemingly at random — as death is wont to do — and Joanne is subsequently thrust into a whirlwind of detail planning and memory. In short, content and form sync really well here: at what point in your drafting did you generally start thinking about the pacing and narrative form?

KF: Thank you so much! When I develop a story, it’s very much like a movie in my mind. I see the story in scenes, so I knew this story would have some pretty major scene changes. In my first draft, though, I didn’t really consider how readers would respond to the pacing and form; I was just getting the words on the page. After that, the story went through many revisions — at least five — and in those rewrites and edits, pacing was probably the story element that I fussed over most. In the initial writing process, I focused on the characters, but in the revision process, the reader was first in my mind. If part of the story dragged, it had to go. Readers wouldn’t have time for the story to drag, and I wanted, above all, to respect readers’ time.

AR: In the first half of the story, there are several references to contemporary pop culture (Netflix, Kimmy Schmidt, Siri, SlimFast, etc.), but these references mostly disappear in the second half. Was this intentional? Is there something that can be said about grief enabling a disengagement from mediated culture?

KF: It wasn’t intentional, but I think that’s a good point. I guess this happened without my intending it because in the second half of the story, pop culture simply doesn’t matter. TV shows are the stuff of everyday life, but when you’re dealing with a break from the everyday, you may not feel the same urge to sit down and watch TV, or to hold to a certain diet regimen.

I will note, though, that such references are not entirely absent from the second half. As Joanne drives to the storage unit, she tries to listen to her mother’s favourite radio station, but ultimately turns it off. It seems this is part of the essence of grief — the tension between sound and silence, the desire to feel connected to the world but also to break away from it entirely. And the pop culture and art we consume in moments of grief may take on a special weight and significance for years to come. For instance, one of my most vivid memories is reading One Hundred Years of Solitude on the morning of my grandma’s visitation. I remember where I was and how I felt, and those feelings will always be tethered to that book.

AR: A little more light-hearted question after the previous two, how much research did you do for the narrator’s own research into bird poop in the story’s first section? Did it lead to any fun facts you like to bust out for friends and family?

KF: I did so much research about bird poop! I write first thing in the morning, and one day my husband woke up and saw that I had maybe ten tabs open, all of them pages about various aspects of bird poop. I also studied how to get rid of buckthorn, mostly by watching demonstration videos on Youtube. Research is one of the most delightful aspects of the writing process for me because I get to satisfy all my weird curiosity. Every time I write a story, I think, I wonder what kind of ads I’m going to get based on these crazy searches. I often keep the strange facts I learn — especially if they’re about poop — to myself. Not exactly dinner table conversation.

AR: The narrator paints Aunt Rita (and, by association, Uncle Harold) as fairly insidious. Do you see Aunt Rita and Uncle Harold as a type of buckthorn themselves, or is there maybe a bit of grief-inspired suspicion and unreliability in Joanne’s reaction to them?

KF: Aunt Rita is, I think, a bit of a buckthorn. (And just a note here: I have a great-aunt Rita, and she is a lovely woman who bears no resemblance to the character!) Aunt Rita is certainly meddlesome, which no one wants at the best of times, but especially in moments of grief. But how insidious is she, really? Would she really, as Joanne reports her mother said, burn the house down looking for the deed? That’s for the reader to decide, but I would be inclined to view this as a one-sided, oversimplified characterization on Joanne’s part, perhaps exacerbated by grief.

When it comes to Harold, he is part of the same family that has been so fixated on this property deed, but his worst crime in the story is feeding half a cookie to his dog. That is a bit uncouth, but not horrendous. Joanne finds it so terrible because of what the cookie represents — her mother’s last gift to her. In times of grief, we infuse literal facts with so many figurative meanings, so small offenses can break our hearts more than they otherwise would.

AR: The family history here is deep and tension-filled. What impact or role do you think family histories have on the present?

KF: That’s an interesting question, and I would have to say it varies by family. Of course, looming family legends and feuds can have profound impacts on the present. But I do think that, even in your average family, tensions can pass from generation to generation. So can more positive legacies. My love of Southern literature makes me want to inflate the mystical power of family histories, but really, I don’t think we really bear our family’s collective memories in our blood or anything like that. I think our parents simply live with the family history and then pass it on to us.

AR: What’s next for you? Can you tell us about any upcoming writing projects?

KF: I’m always working on writing, revising, and rewriting short projects. My big project is a novel that begins in Tennessee in the late eighteenth century and follows a kidnapped girl to Charleston, where two events in her twelfth year lay the groundwork for an accidental career in medicine and a crusade to reform mental health care for women. I think of it as The Signature of All Things meets Jane Eyre, but Thornfield is Charleston, and the women overtake Mr. Rochester, climb into the attic, and set the madwoman free.

To keep up with what I’m doing, visit me at kehfinegan.wordpress.com or on Twitter @kehfinegan. Thank you so much to The Fiddlehead team and Rabindranath Maharaj for this wonderful honour and opportunity. I cannot express my gratitude enough.