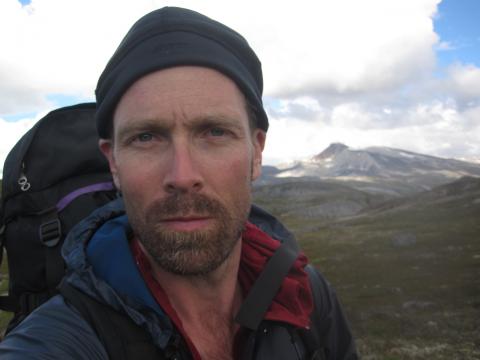 Michael Eden Reynolds’ first book, Slant Room, was published by PQL in 2009. His second manuscript, Elsewhere Thought Known, has already been published in a parallel universe. Michael lives in Whitehorse where he works as a mental health/addictions counsellor.

Robert Norsworthy conducted this interview by email in early April.

Michael Eden Reynolds: Thanks very much! I’m pleased the judges liked my poem.

RN: This poem invites questions about creative process. How did a piece so concerned with growth and development first start to form in your own mind?

MER: The poem’s title predates it by several years. I carried it around from journal to journal and tried to write poems to it with various results. So my mind had been playing with it for a while when these opening lines came. And once a narrative began, the rest of the stanza came quickly, pretty much as it is now. Then the poem was recalcitrant again for several months (or I was) before the last two stanzas came.

RN: The poem begins with the unusual idea about a kernel of corn growing inside someone's head and then branches out into meditations on a variety of subjects from Aztec cities to destiny to lobster claws. How did you decide which connections to make?

MER: The claw is one of Prufrock’s I’m pretty sure. The Aztec city came from the corn, the corn from the monocot . . .  I can get into this mode of writing where it’s a game of associations, where the poem just hands itself along. There tends to be lots of overreaching, and I try to edit that stuff out later, which is easier to do when there’s something else the poem’s subject to. The other poems I wrote to this title are more abstract, and closer to nonsense. The meditation here for me is more a case history of the speaker, and how within us we hold contradictory beliefs often not knowing that we do.

RN: There is a visceral quality to this piece, even in its medical terminology. "Chronic congestion," for example, has an almost onomatopoeic quality that sticks with the reader, particularly during colder seasons when runny noses are common. How do you find a balance between scientific principles and relatable sensations and experiences?

MER: In the last five years I’ve shifted into more clinical social work, counselling, and reading psychology, and that’s provided new language and habits of writing. At work I write lots of case notes to try to organize my understanding of what’s happening for people I’m trying to help. I really enjoy this work, and somewhat unexpectedly it reenergized my writing — though I’ll stress that I don’t write about the clients I work with. When there are characters in the poems, they more likely express parts of me. I see a psychologist myself every two weeks or so, which among other things augments creativity and provides a pathway between the conscious and the un-. As for how I find balance between all these different parts: with uncertainty.

RN: Without losing momentum, the poem incorporates several ideas from subjects outside common knowledge. What effects do you aim to create by incorporating terms that readers may need to look up, such as Tenochtitlan?

MER: Looking things up is easy these days, but if there is too much stuff not immediately accessible to me when I’m reading, I get deflected. On the other hand, things that I have to look up on my first pass can provide a feeling of expansion on repeated reading. Tenochtitlan, seemed like a good Olympus for a god of corn.

RN: Your work bespeaks inspiration from both creative and academic writing. Whom would you name as your greatest literary influences? Do you read styles similar to yours, radically different, or both? Have any recent publications stood out for you?

MER: I can’t clearly trace literary influence. It makes my head spin trying. Not that I’m immune to influence, by the time I’m inoculated against one strain I’ve been exposed to something else I’m susceptible to. Influence of course comes from lots of places (not just literary). I hope I don’t sound ungrateful, I don’t mean that I don’t owe debts to other writers, I absolutely do, but I don’t really know where the rhythms that come to me come from. Or the ideas. Though I’m sure most of it’s stolen.

Part of the reason I submitted to the Fiddlehead contest this year was that I liked Brecken Hancock’s book so much. I submitted to another contest Ken Babstock was judge for this year because I like a bunch of his work, and because it was fun to have rhyming judges.

Lila, the concluding novel in Marilyn Robinson’s Gilead trilogy, made a deep impression on me when I read it last summer. Her characters live in the same place in my brain that real people live. It feels like those things happened to me.

The last book I finished was a translation of Magda Szabó’s The Door. It also has really great characters, but more fantastic (different brain place). I hadn’t read her before, and it’s always interesting to relate to work written by someone from someplace else. It reminded me of a J.M. Coetzee book that I read last year, Age of Iron. If I’m giving the impression that I’m more impulsive than programmatic in my reading, then that’s probably close to the truth.

Permalink Submitted by kathleen (not verified) on Sun, 01/22/2017 - 12:20
i appreciate the honesty and humility expressed here by this writer. i dislike when writers are caged beasts, only fed by other writers. i'm fed by everything! artists pay attention to the world within and around them--the good ones, anyways. linguistics, music, eavesdropping. that's my writerly holy trinity. onwards.