An Interview with Myler Wilkinson 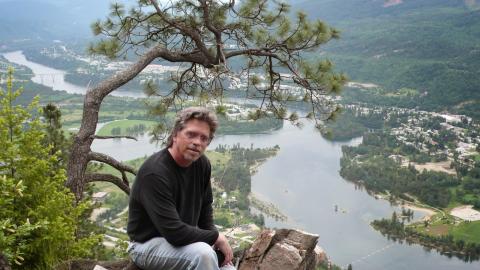 Myler Wilkinson has published award-winning short stories set in British Columbia in journals such as Prism International and Pierian Spring. He has spent extended periods in Russia and has written three books, including Hemingway and Turgenev: The Nature of Literary Influence. He lives in the Kootenay region of British Columbia. His winning story is written from the point of view of Anton Chekhov and is dedicated to the memory of Alexander Vaschenko, friend of the heart, mentor.

Greg Brown: This story was a great reflection on life and death, through a very dynamic imagining of Anton Chekhov. What makes Chekhov, his life, and particularly his death, an interesting topic for you in developing a story?

Myler Wilkinson: “The Blood of Slaves” emerged out of a desire to recapture the voice of an artist, to enter into a kind of second life with a writer I deeply admire. Chekhov remains the one figure who leaves a physical absence, as if he might walk into the room at any moment — with his voice, his laughter (he was by far the funniest of all Russian writers, and perhaps the saddest), his genius as a writer.   Fragmentary images emerge in answer to your question concerning Chekhov:   a bench on the hillside at Oreanda just beyond the Pokrovsky Church where Chekhov gazed down on the Black Sea and imagined his most famous story; the muddy roads south Moscow, and Chekhov’s first country home, Melikhovo; while his guests arrive to eat and drink, the writer retires to a small hut in the garden and begins to write a play which begins with the words: “I am in mourning for my life.”  I wrote “The Blood of Slaves” because this world continues to be very real to me; in some way I simply wanted to be accepted into Chekhov’s company; I missed him — by just over a century.  I arrived when I could.

GB: The story is explicitly about Chekhov's death, but also reflects back on his life and ancestry. There is particular focus on his ancestors as serfs, "slaves." Can you comment on this focus on "slave's blood," and why it becomes a prevalent thought for Chekov as he approaches death?

MW: In one of his most famous letters — to his friend Suvorin, in January 1889 — Chekhov spoke of squeezing the blood of slaves from his body.  He tells of a young boy who has been whipped, who tortures animals, who behaves hypocritically towards man and God . . . all because he is conscious of his own worthlessness, and how that boy begins to squeeze this blood from himself drop by drop until one morning he feels that the blood coursing through his veins is real blood and not the blood of a slave.  Chekhov’s life is defined by an understanding of blood: his heritage as a Russian serf — owned by masters; his contraction of a bacillus which would kill him, suffocating in his own blood; and then finally a reflection on a human truth, which is also an artistic credo:  that blood is impure, humanity infected with the seeds of its own ruin — and salvation — that the blood of slaves runs freely in each one of us, and may, with luck and effort, be squeezed out.

GB: In his short stories Chekov often used a stream-of-consciousness style of writing, which is explicit in your piece as well. Did you consider this a deliberate pastiche of Chekov? What is the value of this writing style for you?

MW: The writer takes pleasure in the text perhaps — the words give a semblance of life as Chekhov once observed. In writing “The Blood of Slaves” I wanted to recover the mystery of a writer’s voice, what he stood for as an artist, what he was as a man. Clearly, memory at the end of one’s life was central to the shaping of the story. This led perhaps to the fragmentary, or pastiche, style you mention. I remember very consciously wanting to bring together beautiful images and words — Chekhov’s words and ideas (and with a scrupulous attention to the words of the artist) but then my own artistic reflections, in my own voice as Chekhov comes back to life — perhaps the micro-history, the private intentions, of a writer that are written down in no book. I wanted to move within that mystery.

GB: Were there any particular stories, plays, or works of Chekov's that specifically drew you to him? Do any of them find a home in some way in this story?

MW: The stories, plays and letters of Chekhov stream through my story — all parts of the voice of a genius. I had hoped to create a home for some in particular: “Lady With A Pet Dog,” a doomed love affair in Yalta above the Black Sea; “Concerning Love,” another unhappy Anna leaving by train, alone, for the Crimea; “Gooseberries,” a narrator who confronts an absent Tolstoy with the question: how much land does a man need; “The Peasants” where Chekhov observes with brutal and tender honesty his own genesis; “The Russian Master” which provides a motif early and late for boredom; and finally “The Darling,” a woman’s story which Tolstoy completely  misunderstood, and deeply admired. These are some of the stories which find a home, and a voice, within my work. And, yes, a dead seagull at the side of the lake makes its appearance, too, as does a doctor named Astrov who sees the coming catastrophe of the natural world.

MW: In recreating an artist’s life, you have to know something and you have to know it passionately.
“The Blood of Slaves” is Chekhov’s story, but Tolstoy is in it. However much the great man misunderstood the young genius, he loved him dearly — and he expressed that feeling as only Tolstoy could. How do you get it right? Research, the letters, the writing. You live in it, and then you have a beautiful young man walking up the birch grove at Yasnaya Polyana and he meets a gnarled peasant man, and it is Tolstoy. You enter the voice; it enters you. . . . And then, too, you plan to write other stories — Tolstoy, Pushkin, Akhmatova, others — each voice demands scrupulous attention.

GB: The Cherry Orchard, Chekhov's last great work, was written as a comedy, but is often put on as a tragedy. Both comedic and tragic elements are also at odds in your story. Can you comment on this?

MW: It’s true that comedic and tragic elements mark Chekhov as modernist master. In fact Chekhov famously referred to his play “The Seagull” as a comedy in four acts — which puzzled everyone at the time. With Chekhov, one can never be fully assured within either realm. Perhaps the place one sees this most clearly is in his letters (I have drawn on them freely in creating the master’s voice). There are people who believe Chekhov was the last master of letters as a literary form. They are remarkable — beautifully wrought (as if he could not write a bad sentence), warmly human, a humour which bubbles up from some inexhaustible subterranean source, and always the shadow of sadness. Shadow and light.  I wanted to achieve some of that tone in the writing.

GB: Could you comment on your reaction to winning The Fiddlehead's contest with this story? How confident were you with this submission?

MW: I was confident of the story on Chekhov, and was confident of its worth, from the time I began working on it. I also took an almost unalloyed pleasure in its creation, writerly pleasure perhaps, which can be quite rare. I certainly was not confident of winning The Fiddlehead prize. I assume that there were many fine entries; I am thankful the editors saw merit in what I was trying to do, and out of the myriad of possible choices my story was chosen. I am thankful for that.