An Interview with Richard Kelly Kemick 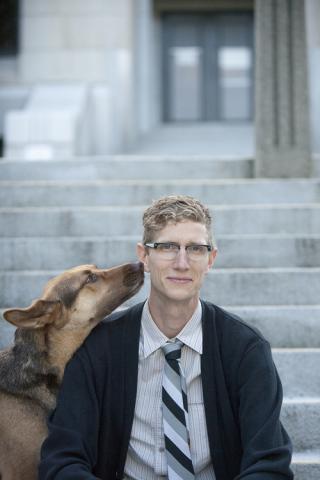 Richard Kelly Kemick’s story “This All Brings Me to Now” appears in the Autumn 2016 issue of The Fiddlehead. He has been published in literary magazines and journals across Canada and the United States, most recently in The Walrus, Maisonneuve, Carte Blanche, and Tin House. His debut collection of poetry, Caribou Run, appeared in spring 2016 from Goose Lane Editions.

The interview below was conducted via email. Richard was in the MA a year above me, and it’s been a great joy (with a mix of envy) to watch his career blossom over the past few years. The toughness of the questions he complains about is slight payback for all those aces he smashed during our table tennis matches.

Andrew Ramos: Do you use your writing to work through your own personal thoughts, or is fiction more of a way to explore different worlds for you?

Richard Kelly Kemick: I’m finding that the more nonfiction I write, the more eccentric my fiction becomes. In this way, fiction is an opportunity for me to not just explore different worlds but to burn them to the ground. I’ve never gotten writers who (always in a tight-lipped frown) declare, “The character demands to be an accountant.” Really? Is that really true? I mean, if a figment of your imagination is demanding you do something in a certain way, it seems you have larger problems than plot.

Fiction, for me, is a junkyard bonfire, where you keep tossing stuff on to see the unexpected combustion. I don’t mean to argue that everything in fiction has to be outlandish. Indeed, some of the best fiction is dreadfully real. But for me, the best fiction happens when characters — just like us — aren’t entirely sure who they are or what’s happening to them but are still trying to stumble through their haphazard world, the children of chaos and custom.

AR: There is an interesting tension at play throughout this story between knowing sensational moments of violence and an inability to articulate that experience; what sort of social commentary do you think this makes, and what role does fiction play in allowing us to articulate complex ideas or emotions?

RKK: Do you ever get the feeling that the perfect time to rework your stories — to see them with fresh, editorial eyes — is when they’ve already been published and you’re being asked about them? I think a weakness of my story is that I leaned too hard on this theme: I “told” rather than “showed.” (What would my workshop think?!)

For me, writing violence is incredibly difficult. “They fought. There was blood. They stopped fighting. The blood dried.” I sound like a methed-out Raymond Carver. I think this inability is telling, however: it is easier to witness violence than to articulate it. Because to speak of violence (whether it be physical, sexual, psychological) is to become involved in it — in choosing which words you will use to describe it, you are implicitly taking a stance. That level of participation is, I think, underdeveloped in the narrative. The narrator speaks of violence in a way that never fully comes into conflict with his own participation.

I hedged my bets because fiction, I think, is unique in forcing us to confront the narratives we’ve constructed in our own lives. Since the genre is both made up and real, it’s hard for us to not see the same characteristics in the stories of ourselves. There’s where my failing is: to have my narrator articulate the rippling effects of violence demands that I do the same. How am I complicit in societal violence? How does it benefit from my inability to speak? How do I benefit? “A lot” would seem to be the answer to these questions.

AR: The audience whispers “about the relentlessness of justice” when Francis’ jaw is gored. Of course, the rodeo (presumably) wouldn’t exist without the audience’s financial support. How do you see these sorts of blinds-spots playing into the aforementioned inability to articulate certain experiences?

RKK: This question is too difficult, and I’ve gone through like ten answers — none of which are any good. Therefore, the story’s rodeo is supported by the Canada Council for the Arts and, like poetry, exists beyond the spheres of capital.

AR: Lindsay Stimpson’s sister remains unnamed in this piece, essentially defining her through her Down Syndrome. What led to this narrative choice?

RKK: During the editing phase, I mulled about this one for a while. I wanted the story to be about power, the unspoken nature of it. Lindsay’s sister is the one with the least amount of power in the story, yet she is the character which (in my mind) the most exceptional events happen to. She is passed over by her sister, her school, and even the narrator — who is supposed to act as our ambassador to this world. I *hoped* that by keeping her nameless her anonymity would enable a kind of mythology surrounding her. In this sense, she acquires a power from the powerless state she exists in. It’s all very Amy Hempel-esque, Andrew; so just trust me that it’s genius.

AR: The narrator claims, about Lindsay’s sister, “it didn’t make any sense to me that somebody who finally got their chance to get out of here, in a way that nobody would ever come looking, would come back.” This seems to create an interesting parallel with Gabriel’s desire to return to Afghanistan. How do you view this parallel working with the larger themes of this story?

RKK: Andrew, these are super hard questions. What are you doing to me? K, lemme take a swing at this.

A theme I was interested in exploring (and still remain so) was how there is at least one point in our lives where we’ve wanted to run away. And if fleeing didn’t have such a dismal success rate, we’d all be runaways and dear ol’ Munro would have to write collections about every person in the country. What’s so heartbreakingly fascinating about running away isn’t how hard it is but rather how easy it is, that doing so only proves how replaceable our lives can be.

I think this replaceability is what’s holding the narrator back. When he sees people who were given the chance to run away but still went back to the same shitty lives they were living, he comes to terms with the futility of escape, that — as some hack named Ernest once wrote — “you can't get away from yourself by moving from one place to another.”

AR: I feel like the story’s conclusion is fairly open-ended — as readers, I think we’re left to question whether Gabriel is just “getting” everyone the way he does earlier at the campfire, or if something more insidious is going on. What does the ending mean to you? What do you hope it invokes in the reader?

RKK: The idea of ending a short story with anything as pigeon-holed as a “conclusion” has always seemed a bit odd to me. In our post-Bartleby world (there’s a term I try to use at least once every dinner party), I think the form best functions as a snapshot of a larger life.

I don’t think (or, at least, I wish) that the story isn’t so much left “open” as it is “unfinished” — that these events will ripple long into the future, and that these characters are being touched by events which happened in deeper pockets of time. And to trace all these ramifications would be impossible. I hope the ending invokes a feeling of crushing, irreparable, emotionally devastating nihilism in the reader.

AR: What projects are you currently working on?

RKK: For the past few years, I’ve been clacking away at a collection of short stories (of which “This All Brings Me to Now” is a part). The collection was recently rejected, but I’m trying to use that as an opportunity to make the stories better. Rejection really stings for me (as I’m sure it does for every author), and I often get impatient with my own progress and lack thereof.

The writers I most admire, however, are those who are more concerned with the quality of their work rather than the distribution of it. I’m trying to look at the rejection as something which is forcing me to demonstrate that same trait. Some days are easier than others.

AR: You’ve written great pieces of poetry, fiction, and non-fiction: is there a mode of writing or genre that you enjoy most, or, conversely, that you find most challenging?

RKK: I find poetry to be the most challenging. With prose (whether it’s fiction or non-fiction), I still find it difficult but the more I write it, the slightly easier it becomes. I’m learning the form, learning some tricks, learning to edit. Perhaps prose is like how my father, who is a cabinetmaker, approaches making a kitchen. Sure, it’s a ton of work, but the more you do it the more confident you become. And writing is a confidence game.

Poetry, however, is merciless. The more poetry I write, the weaker my writing seems. All I can see are the failures (of which there are many). I haven’t read my own poetry collection, have only pulled out a couple poems I use at readings, for this reason. In the past two years, I have written exactly three poems that don’t make me nauseous. And they’re about cowboys, Andrew. Cowboys. Lord have mercy.

But that satisfaction you get from finishing a poem . . . there’s nothing like it. (Except, of course: money, sex, cigarettes, whisky, successfully fighting a traffic ticket, ice cream, dog walks, driving a car that isn’t yours, butter, drink specials, violin music, etc., etc.)

AR: What writers do you turn to for inspiration?

RKK: It depends on what I’m working on. Right now, I’ve been returning to Mark Anthony Jarman, Don Gillmor, and Zadie Smith. I’m trying to acquire a more unique narrative voice without turning to cheap flares of showmanship. These three writers, I think, present deeply stylish prose without the use of pyrotechnics.

Lately, however, I’ve mostly been reading my mother’s texts as I’ve recently got iMessage and the woman is going berserk. How many times does a person need to send the sunglassed-smile emoticon? HOW MANY TIMES?!

AR: FINAL BONUS Q: If you could choose to have dinner with any historical figure, who would it be, what would you talk about, and what do you think they would order?