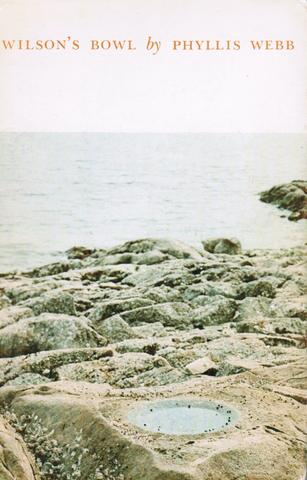 In 1980, at a reading hosted by Open Space, an artist-run centre still operating in downtown Victoria, Phyllis Webb signed my copy of Wilson’s Bowl, her fifth collection of poetry, and the first since she’d published Selected Poems nine years before and the first that was wholly composed of new work since Naked Poems appeared in 1965. There’s nothing personal in the few words she wrote, simply my name above hers in a tight cursive on the half-title page—no best wishes, no admonition that I should enjoy the poems in the pages ahead. I wonder now if she’d meant them to be open to interpretation, and to judgement, without interference.

Yet, for me, the experience of owning and having the book signed was personal to the extreme, for I had felt an identification with Phyllis’s poetry since the first time I’d encountered it not long after enrolling in the University of Victoria’s writing program in 1978. To a twenty-one year-old recovering from what today we would call anxiety, few poems had ever spoken as deeply to me in their noble articulation of existential pain—“What are whole or beautiful or good for / but to be absolutely broken” (from “Breaking,” The Sea Is Also A Garden, 1962). I’d found much validation in the poems for which she was already justly known, and this new book, which I now fear was intellectually far beyond me, did not disappoint.

Like many writers, I must admit that even if the poets of my youth have stayed with me cellularly, I don’t now often read them. Webb’s death in November 2021 spurred me to take her books down from the dusty shelves where they’d been enshrined through years of benign if indebted neglect. Long free from the anxieties of my youth, I brought to them an appreciation informed by four decades of subsequent reading and thinking while I wrote poems of my own. My admiration, once reawakened, reminded me of the sense of occasion that had greeted the publication of Wilson’s Bowl, a quiet excitement that few books and their authors have enjoyed since. After a jury of her peers failed to nominate it for that year’s Governor General’s Award, writers across the country raised $2300 (or double what then came with a GG) to honour her with a prize in lieu, thereby recognizing not only this long-anticipated book, but also Webb’s “presence as a touchstone of good writing in Canada.” Who can imagine anyone today doing something similar, despite the alacrity with which crowdfunding can attract significant sums of money? As a friend said to me, we’d register our displeasure on Facebook and instead move on.

How aware Webb was that readers had been waiting for new work by her I do not know, but in the foreword to Wilson’s Bowl she did feel the need to explain why the book had taken so long to appear: “Wayward, natural and unnatural silences, my desire for privacy, my critical hesitations, my critical wounds, my dissatisfactions with myself and the work have all contributed to a strange gestation”—all anxieties with which I can now empathize. Some of these new poems were culled from uncompleted projects that had resisted her ambitions for them; others explore the themes of her time and generation, including the Holocaust, political dissent, and nuclear proliferation (one poem in its entirety is “Three? / Mile? / Island?”). The title sequence, which elegizes the deaths by suicide of her neighbour, Lilo Berliner, and UBC anthologist, Wilson Duff, draws upon the Indigenous imagery of the West Coast that had caused the two of them to exchange long searching letters, a correspondence that Webb discusses in an essay she’d collect in Talking in 1982. Although reading these poems in the shadow of today’s conversation about colonialism—a conversation whose roots are traceable to the time they were written and first published—can be disquieting, it’s nevertheless clear that Webb wrote them mindfully. She was inarguably one of Canada’s most cerebral and intellectually adventurous poets. Her curiosity about form, as evidenced by the entire range of her work, never rested until ten years later she let the urgency to write poems rest permanently with the release of her last collection, Hanging Fire. Every book she published between 1954 and 1990 rewards, but Wilson’s Bowl is her master work. Amongst all the darkness that Webb marshals inside it with enviable restraint, there are ecstatic moments of joy:

Blossoms—
[…]
in shell’s pink
growing, birth
of the world
/ feathery
flesh or love
what matter?

John Barton’s books include Polari, We Are Not Avatars: Essays, Memoirs, Manifestos, and The Essential Douglas LePan, which won a 2020 eLit Award. Lost Family, his twelfth book of poetry, was nominated for the 2021 Derek Walcott Prize. His poetry was most recently featured in The Fiddlehead in the Spring 2022 issue. He lives in Victoria, where he is the city’s fifth poet laureate.