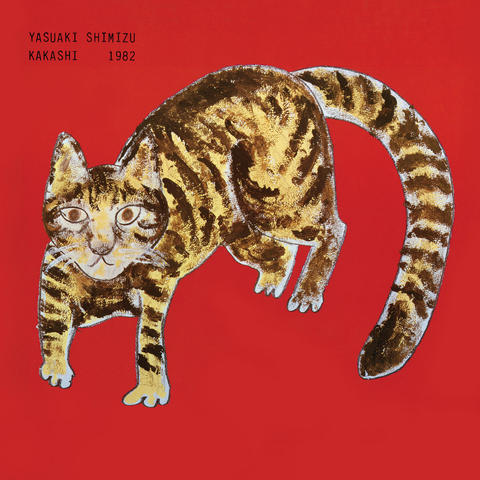 I acquired my copy of Yasuaki Shimizu’s Kakashi early in the pandemic. Its effect during this period of stillness and hermeticism was more palliative than I’d anticipated: the record feels like traveling. All I knew about Shimizu was that he was part of Japanese experimental rock outfit Mariah and that he’d recorded a version of Bach’s Cello Suites for tenor saxophone. I opted to purchase Kakashi without hearing a note. Its cover features a rendering of a cat who may or may not be attempting to hypnotize us.

Kakashi opens with the buoyant, propulsive “Suiren” (Water Lillies), in which Shimizu’s sax skydives in, before segueing into the title track’s dub-kissed, blissed out shifts in rhythm, emphasizing this recording’s exquisite depth of field, instruments communicating across varying distances. By “Kono Yoni Yomeri” (Just Like That) we’re floating in outer space, with bleeping transmissions and a horn section that seems to be working in darkness, grasping at the furniture. Side One closes with a serene lament complete with cricket chorus.

Side two opener “Yume Dewa” (A Dream) introduces a little light skronk and cymbal sizzle before the horn section returns on horseback to storm the city gates. I don’t know that there’s anything on this record you could call a solo in the sense that we typically identify a solo in jazz or rock, but the dynamism and drama of Shimizu’s playing—and he plays nearly everything—is exhilarating. Kakashi’s closer, “Utsukushiki Tennen” (The Great Wonder), is a kind of procession bridging ancient Japan, North Africa and the Middle East, and is totally transporting.

Part of the appeal of Kakashi is its distinctive resistance to category. It was originally released in 1982. Shimizu was not yet thirty, but there is everywhere on this record both fire and maturity, control and high adventure. Among those recording at the time, the musician-composers who could be deemed Shimizu’s peers—all of them older—will be credited with fostering the inanely titled genre of world music avant la lettre: Holger Czukay, Brian Eno and David Byrne, Don Cherry, and Shimizu’s fellow countryman Haruomi Hosono. If you’re on good terms with even one of those visionaries, do yourself a favour and let Kakashi sweep you away somewhere.

José Teodoro is a playwright, critic and essayist. His work has appeared in publications such as Brick, Film Comment, The Globe & Mail, and The Believer. He is currently adapting his play Cloudless for the screen and recording his tandem-narrative chamber opera Screen Door with composer-musician Stephen Lyons.

José Teodoro's essay "Cul-de-sac" is featured in the new Summer Creative Nonfiction issue of The Fiddlehead. Pre-order your copy today!