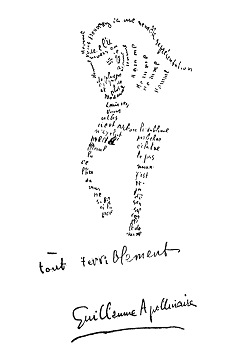 I’ve been reading Apollinaire’s Calligrammes (trans by Anne Hyde Greet with Commentary by the translator and S. I. Lockerbie, University of California Press, 1980), a 500 page, dual language edition with 150 pages of notes on the minutiae of the poems. It’s a tough go, but I’m loving it and learning a bunch. Like many people I’ve probably thought of this as the place to find the “picture-poems” when I’ve wanted to use them as examples for something. I have thrust “Il Pleut,” with its sinewy lines snaking down the page like rain on a window, onto a couple of generations of students without knowing much of anything about its context.

But I’ve been learning in this reading that Calligrammes is so much more than that, both one of the first significant modernist book of poems, but also the greatest French collection of World War I poems. How had I missed that for so long?

I was reading early in the book and came to “Lundi Rue Christine.” This is often referred to as one of Apollinaire’s “conversation poems.” Here he is recording a half heard conversation that might be about planning a robbery or something a bit less illegal. But the poem’s trying to get down very basic, “unpoetic” words. “I’m leaving at 8:27 P.M.” “Look Jacques it’s extremely serious what I’m going to tell you.” The long-ish poem ends


And it hit me this time, that this is very similar to Frank O’Hara’s I-do-this-I-do-that poems, only done 50 years earlier and in another language. Take O’Hara’s famous “The Day Lady Died,” for instance. There is that same collection of ordinary moments, disjointed, but perhaps not as disjointed as the Apollinaire poem. And then that beautiful ending:


I couldn’t believe that this connection seemed so obvious between these two poets separated by so many decades. Right away I looked in Marjorie Perloff’s Frank O’Hara: Poet Among Painters, and immediately found that O’Hara considered Apollinaire one of his masters and “a life-long hero.” My reading date says I read the Perloff book in 1984, but I hadn’t remembered the connection at all.

But now I won’t forget it. And I have that little joy that comes from finding a connection, sixty years later, between all the work being done in New York in the 1950s with the work being done in Paris before WWI. And between two poets who always seemed to find incredible surprises buried right in front of us, smack dab in the center of the ordinary. Sometimes, in reading, time just disappears!