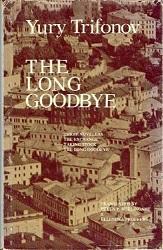 I am reading Yury Trifonov, his novellas “The Exchange” (where he explains and illuminates an entire way of life in the USSR of early seventies), “Taking stock” (or “Preliminary Conclusions”, which could have easily been the title of all his works, since they are all connected with evaluating a life in terms of the long run, the moral choices made or not made – and the role of character as well as fate. ) and “The Long Goodbye” (the most complex of these three works; it is ostensibly about a protracted love affair between an actress and a writer, but once again the evaluation of life is central. Here the hero is a failure, but he is still young; life may give him a chance to be successful – the evaluation is taking place too early. The moral choices in this story are so tightly bound up with character and psychology that it is impossible to separate them: do these people make the choices they make because of their sense and morality, or because of their essential personalities?).

All three novellas are joined by a somber style, deliberately prosaic in its imagery. Trifonov’s heroes do not reach for poetic metaphors when they are happy or sad, they use concepts and objects from their everyday life, their ordinariness is emphasized. Which is the point about these people – they are not better or worse than others, they are ordinary, but they have serious problems, enjoy moments of euphoria when they feel that life has promise; in a word they are human, a category that comes up several times in the stories, when it is affirmed that whether a man is an intellectual or not is not important – but whether he has humanity is. In these works, humanity is often denied, but the characters have their memories of happier times, usually in their childhood, and these memories can be both consoling and saddening.

Trifonov’s works give us the texture of everyday life, with the interlocking worlds of family, career and conscience; but he provides no solutions, makes no conclusions that can be used. He is content to state the problem clearly, and show us that there are no heroes, no real villains. This is the gray blur of adult moral compromise, not the black-and-white photograph of childhood conceptions of honor. But all Trifonov’s characters long for the consoling sharpness and clarity of those early beliefs.

Lazar Trubman's story Toxic Susan will appear in the upcoming Fall issue of The Fiddlehead. Subscribe now to be sure you don't miss out!