When I was very young, three or four years old, my father—always the adventurous parent—took me and my two brothers to a drive-in movie. I recall how we waited in the car for night to fall, as I stuffed myself with popcorn and red liquorice whips. I was wearing yellow feet pajamas without the feet and had bundled myself comfortably into my well-gnawed and worn pink security blanket, expecting something from The Wonderful World of Disney.

As it turned out, however, the film wasn’t The Son of Flubber or The Sword in the Stone. It was a terrifying movie called The Haunting that had me hiding beneath my blanket, crying and shrieking, anxiously ripping the flesh off my thumbs, and begging my father, who was engrossed in the film, to take me home.

His solution was to offer to put me in the trunk. I liked the trunk. It was quiet and cozy in there and could be a lot of fun, especially when the car was bumping along potholed roads or taking sharp bends. But here in the darkness, as actresses Julie Harris and Claire Bloom cowered in the chill of supernatural cold spots on the screen above, as wooden doors bent like rubber, and hideous demonic faces could be discerned laughing in wallpaper patterns, the last thing I wanted to do was get into the trunk all by myself.

Over the years, that film stayed with me. In fact, it haunted me. It was my initiation into the darkly numinous from which a love of the Gothic and all things psychologically disturbing would grow. When I eventually read Shirley Jackson’s novel, The Haunting of Hill House, on which the movie was based, I marvelled at the techniques she employed to capture her readers in the protagonist’s interior world, and to make of Hill House a character, which was not merely haunted, but as the book’s Dr. Montague explains, was “leprous” and “deranged.”

This past summer I chanced upon Ruth Franklin’s excellent 2016 biography Shirley Jackson: A Rather Haunted Life, which propelled me into binge reading (and in many instances re-reading) Jackson’s works. Even though much of the author’s life landscape, as presented by Franklin, is contextualized in the framework of the 1950s, women writers today—particularly women writers who also happen to be mothers—will find all too many chords of resonance.

One would think that the waves of feminism since Jackson’s time should have washed clean discriminatory notions of gender roles, that expectations of running a tidy home, having neat and clean children, and being forever able to put one’s work on the back burner should not be laid on women anymore.

One would think that in these more “enlightened times,” when a woman mentions that her male partner does the brunt of the cooking for the family, it shouldn’t be assumed that he does so because he “enjoys” it. When has enjoyment been a prerequisite for the many traditional domestic chores women have been (and continue to be) expected to do?  It’s most likely that he hates cooking just as much as she does, but he lost the coin toss. At least, we can be thankful that in 2019, there might be a coin toss if the couple are conscious enough to see the inequality in conventional domestic arrangements, cooperative enough to search for solutions, and tough enough to defy still prevailing cultural narratives.

But what does this have to do with Jackson, who, although no fan of cleaning, apparently did enjoy cooking, and engaged in such fun and transgressive activities as dyeing mashed potatoes a hideous green because “the regular kind bored her.” According to Franklin, it was the “push and pull” between competing personas (the writer and the housewife) that Jackson faced.

Competing personas is a tension with which many women still grapple. Women who are writers seem to have a unique burden in that writing is frequently considered a hobby, rather than a calling. When a baby cries or a loved one falls ill, the embedded time-worn message is that woman’s higher duty is to others, not to the sustaining creative force within. And even if help can be employed, it still inevitably seems to fall to women to orchestrate the help.

After Jackson published her most well-known short story, “The Lottery,” and was earning enough money to hire a housekeeper, she was still bogged down with domestic tasks, writes Franklin: “All the little chores, as she put it, that ‘no one but me ever remembers to do—things like keeping the toys together, and filling the cigarette box, and about five hundred small things like that,’” must have sucked away precious writing time.

Reading and re-reading some of Jackson’s works in light of Franklin’s biography, I’m struck by how central the domestic realm appears. Jackson was not only a master of depicting the dark side of domesticity where deranged houses, “born bad,” imprisoned their inhabitants, and daughters, denied their dinner, poison their parents with arsenic-laced sugar as does the character Merricat in We Have Always Lived in the Castle. Jackson also wrote whimsical essays and full-length humorous memoirs about family happenings, such as her Life Among the Savages. According to Franklin, “Jackson essentially invented the form that has become the modern day ‘mommy blog’: a humorous, chatty, intelligently observed household chronicle.”

Even Jackson’s lecture on writing, “Garlic in Fiction,” which appeared in the 2015 posthumous collection Let Me Tell You offers a culinary metaphor:

Within the rigid framework of the short story, without in any way destroying its unbroken unity, from the first word to the last, the writer is permitted a good deal of space in which to catch at the reader and hold him with small things, used—and here the garlic comes in—sparingly and with great care, but used always to accent and emphasize.

According to Franklin, Jackson’s life was in many ways tragic. She fell in love and married Stanley Hyman, a domineering, egotistical academic. He was open about his extramarital affairs and angered when Jackson refused to happily accept them. While he valued her writing and the money it earned, he was jealous of her fame and didn’t in any real way value her.

Jackson’s mother was snidely critical, making references to her daughter’s unkept appearance, excessive weight, and messy house. A doctor put Jackson on Dexamyl, “a combination pill that included both amphetamines and barbiturates,” to assist her in losing weight. Later, she’d take tranquilizers and drink heavily to deal with anxiety and agoraphobia. She suffered from ill health and died at age 48 of a heart attack.

Despite the quality of her work and the popularity it garnered in her lifetime, it remains largely dismissed or ignored in academia. Apart from The Lottery which is perennially anthologized, and The Haunting of Hill House (There was a 1999 remake of the film The Haunting and last year Netflix produced a series it claims to be loosely based on the book ) Jackson’s well-crafted, brilliant and haunting works have been virtually forgotten in the wider world.

Madeline Sonik is a Canadian writer who, as a teenager, lived and worked in a small seaside village called Ilfracombe. 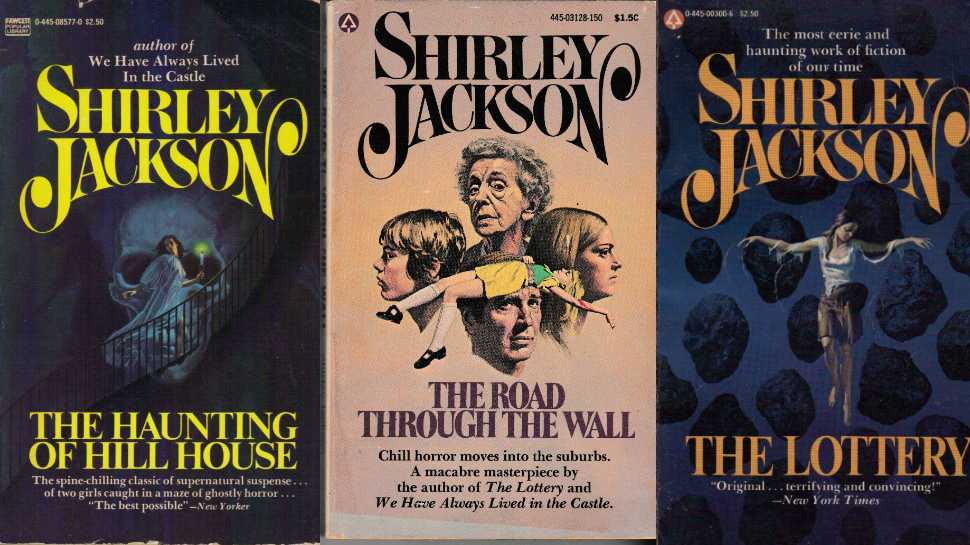