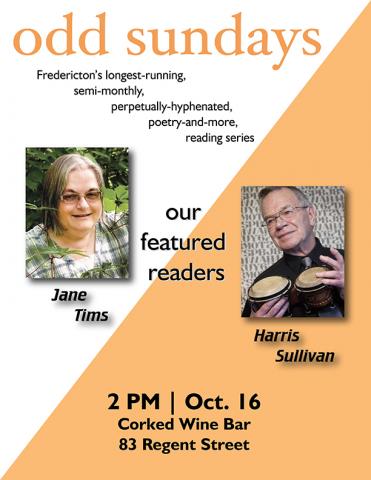 Jane Spavold Tims is happy to read from her book within easy reach, poems and drawings about eating local, wild foods, published by Chapel Street Editions in Woodstock. Jane lives in rural New Brunswick and is a botanist who often includes natural themes in her work. Jane is a member of the Writers’ Federation of New Brunswick and a member of local writing groups Fictional Friends and Wolf Tree Writers.

They call Harris Sullivan The Bongo Poet. That’s because he plays bongo drums to spice up his public readings from his two books of poems. A native of Richibucto, he is a retired award-winning journalist who worked 37 years in his profession in Moncton, Toronto, Montreal, and Halifax. Harris has been on the spoken word scene across the Maritimes for nearly five years. His material is all over the map — love poems, sex poems, breakup poems, scathing commentaries on our somewhat broken world, reflections about his parents, and a lot of humour. And there’s a touch of music. In addition to the bongos, he sings some of his poems in his readings, certainly making him one of the unique spoken word poets in this region.