Join the odd sundays reading series for the beginning of its fourth season at Corked Wine Bar, 83 Regent St. Come this coming Sunday, October 21, at 2pm for readings by Janet Barkhouse and Frances Boyle.

Janet Barkhouse is a poet and writer living on Nova Scotia’s South Shore. Her poems and stories have been published across Canada in such journals as CV2, TNQ, Riddle Fence, Room, and the Literary Review of Canada. Her debut collection of poems, Salt Fires, recently published by Pottersfield Press, follows on two chapbooks — Silence, and Sable Island Fieldnotes (with photographs by Zoe Lucas); a docupoem short film screened at Lunenburg Doc Fest 2017; and three children’s books. In 2013-14 she was Artist in Residence with her daughter, singer-songwriter Alex Hickey, at Dalhousie’s Medical School, through their Humanities-HEALS program.

Frances Boyle’s most recent book is Tower, a novella from Fish Gotta Swim Editions. She is also the author of the poetry collection, Light-Carved Passages, and a second book of poetry forthcoming next year from Quattro Books. Frances’s writing has received a number of awards, including The Diana Brebner Prize, the Tree Reading Series chapbook award, and This Magazine’s “Great Canadian Literary Hunt.” Her short stories and poems are published in print and online literary magazines and anthologies throughout Canada and in the U.S. including, earlier this year, The Fiddlehead, The New Quarterly, The Antigonish Review, The /tƐmz/ Review, Juniper, and Bywords. She is part of the editorial team at Arc Poetry Magazine. For more, please visit www.francesboyle.com

The odd sundays team say, "Come prepared to meet old and new friends, get a beverage from Charlotte and a book draw ticket from Ana, find a seat and enjoy a time of great readings. And oh yes, if you are so inclined, bring something of your own to read at the open mic." 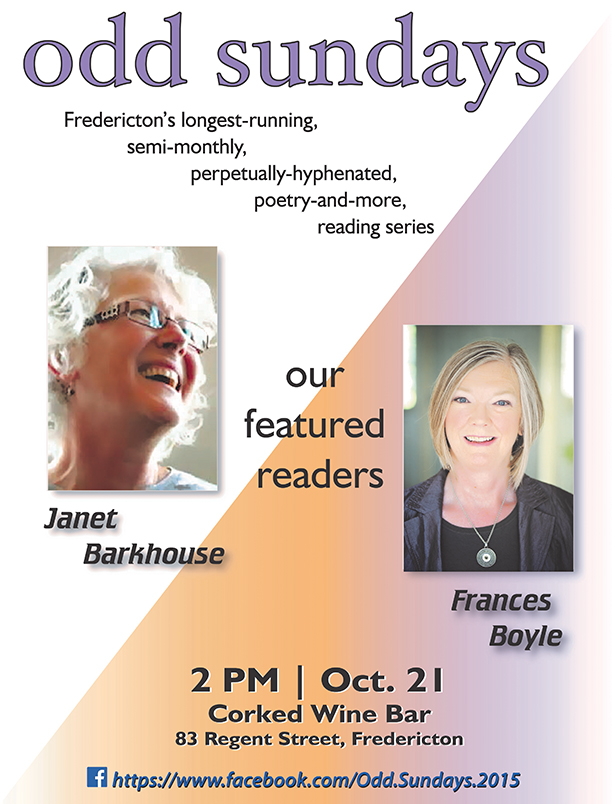