Odd Sundays will commence once again at Corked Wine Bar, 83 Regent St. at 2 PM on Sunday, October 15 to mark the beginning of a new season of Fredericton’s favourite readings series. 2018 will be odd sunday’s 14th year, and we will start the year off by featuring Kathy Mac and Kerry Lee Powell as guest readers. The readings will be followed by an open mic and a book draw.

Kathy Mac’s most recent book of poems is Human Misunderstanding (Roseway, 2017) Her previous poetry books are The Hundefräulein Papers (2009) about the years she spent as the dog-sitter of Elisabeth Mann Borgese, the daughter of Thomas Mann, and  Nail Builders Plan for Strength and Growth (2002) which won the Gerald Lampert Award and was a finalist for the Governor General’s Award.  As Dr. Kathleen McConnell, she runs the creative writing programs in the English Department at St. Thomas University, where she advises for the online Atlantic Canadian Poets Archive and the PoeticPlacesFredericton app, currently available at the playstore and at poeticplacesfredericton.ca.

Kerry Lee Powell was born in Montreal and has lived in Antigua, Australia, and the United Kingdom. Her debut poetry collection was published by Biblioasis Press in 2014, and was nominated for the Gerald Lampert Award and the Alfred Bailey manuscript prize. Her most recent book Willem de Kooning's Paintbrush was nominated for the Giller Prize, the Rogers Writers' Trust Fiction Prize and the Governor General's Award for English Language Fiction. She has served as series editor of Grey Suit, a London-based contemporary visual arts archive and press funded by the The Elephant Trust and the Arts Council of England. Kerry Lee is the 2017 writer-in-residence at UNB. 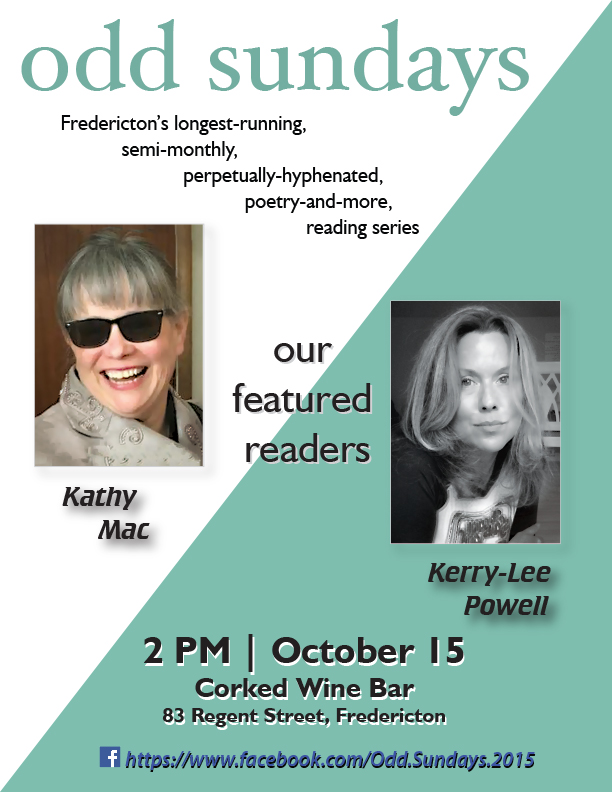