Patrons of odd sundays will gather once again at Corked Wine Bar, 83 Regent St. at 2 P.M. on January 29th to hear readings from poets Sarah Cooper and Lucas Crawford.

Sarah Cooper grew up in both Quispamsis and Saint John, New Brunswick, under the watchful eye of her Labrador Retriever Beau. She began her struggle with mental illness at a young age, in many forms, and caused by a combination of biological and environmental factors. Music was her favourite form of therapy, and within lyrics she found understanding. While in high school Sarah was officially diagnosed with Major Depressive Disorder, and a diagnosis of Psychogenic Non-Epileptic Seizure Disorder followed shortly after. Once high school came to its conclusion she moved to Prince Edward Island, where she fell in love with the Island and its inhabitants. She then studied creative writing at St. Thomas University in Fredericton, New Brunswick.

Lucas Crawford is the author of Sideshow Concessions (Invisible 2015), which won the 2015 Robert Kroetsch Award for Innovative Poetry, and is also the author of a book of scholarly essays about transgender. Lucas teaches English at UNB and is from rural Nova Scotia. 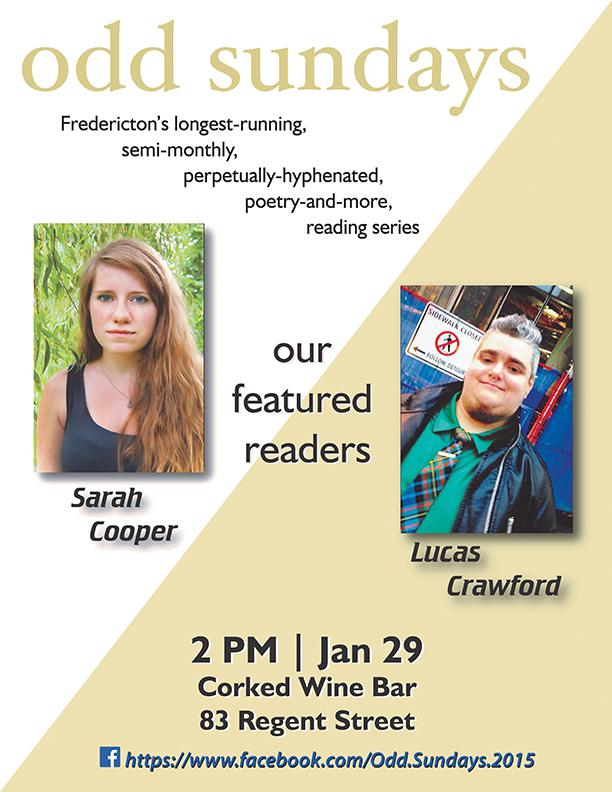