On November 19th, odd sundays, at Corked Wine Bar, 83 Regent St., Fredericton, will welcome two poets from Maine. Michael Brown and Valerie Lawson visited odd sundays two years ago, and we expect their visit with us this time will prove once again to be enthusiastic and enjoyable. Plan to be with us on Sunday, Nov. 19 at 2pm for their reading, the open set (bring something to read under 3 minutes!), and the book draw (free!).

Valerie Lawson's poetry has been published in Main Street Rag, BigCityLit, and others. She won awards for Best Narrative Poem and Spoken Word at the Cambridge Poetry Awards, and was a finalist for the 2015 Rita Dove Award. She has co-hosted the Boston Poetry Slam, emceed the National Poetry Slam in Sweden, was invited as a Legacy Poet to the first Women of the World Poetry Slam. Most recently, Valerie edited 3 Nations Anthology: Native, Canadian & New England Writers, which features poems, essays, and fiction from 58 writers, ranging from those for whom this is their first publication to a nominee for the Pulitzer Prize. Valerie teaches poetry workshops in New England and has worked as a bookseller. She once worked as a security guard at a Rolls Royce show.

Michael Brown published his first poems when East Texas State University hired him to head a Ph.D. program in the teaching of English. By 1990 he became involved with poetry slam, and moved to Boston where he and his wife started the Boston Poetry Slam. Slam and poetry resulted in trips to Europe, exchanges with Irish artists, and coordinating the first Poetry Olympics in Stockholm. Michael has published poetry in Falling Wallendas (Tia Chucha in 1994), Susquehanna (Ragged Sky in 2003), The Man Who Makes Amusement Rides (Hanover in 2003) and The Confidence Man (Ragged Sky in 2007). The Martin Bormann Dog Care Book collects political poems from the last 50 years. In 2007, he and Valerie Lawson moved to Downeast Maine where they take in retired sled dogs, and where their front windows look across the Passamaquoddy Bay to St. Andrews, NB. 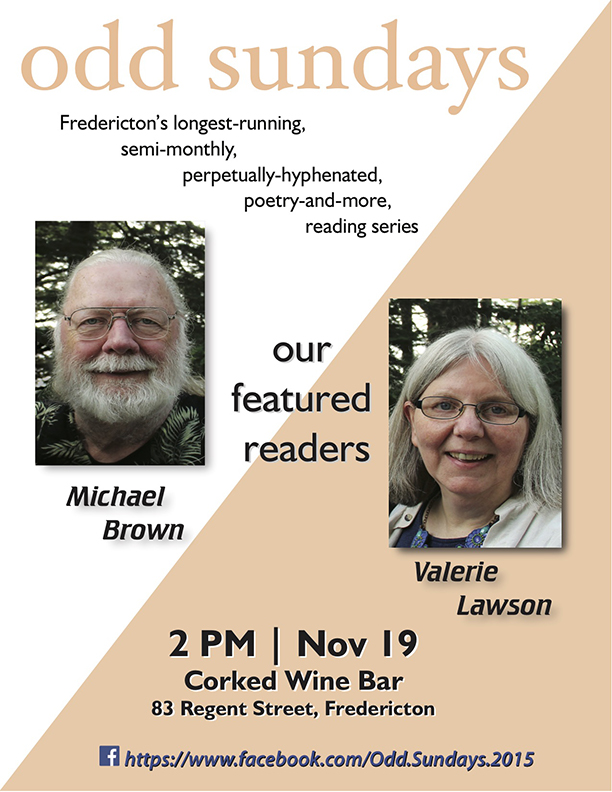