A Playlist of Cozy Poems For Fall 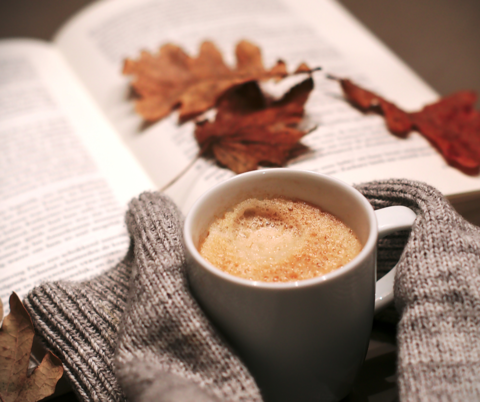 A playlist of cozy poems for fall by editorial assistants Meghan Kemp-Gee and Rosemary Henbest:

Wednesday was the first genuinely chilly morning in Fredericton. We were cold, so we started thinking of warm, homey things to read on frosty mornings.

In one of our childhood favourites, The Cozy Book, Mary Ann Hoberman writes an adorable love letter to all things cozy:

When you wake up bright and early
in your roasty toasty bed
with your covers wrapped around you style
and your pillow on your head
and you peek out at the morning
that's a cozy kind of way
to begin the cozy doings
of a very cozy day.

The OED records the first uses of the word “cozy” (or “cosy”) in 1665, and the word’s meaning has remained basically unchanged since then. Cozy is a pretty timeless #vibe: huddling indoors with a warm drink, sitting alone and watching the first snowfall, celebrating a holiday with loved ones, or simply spending five extra minutes under the covers.

With this aesthetic in mind, here’s our fall playlist of cozy poems.

We start with some classic poems for autumn and winter. Robert Frost’s Stopping by Woods on a Snowy Evening is the perfect length and catchy rhythm to read aloud. If you’re alone on a cold evening, you could listen to Johnny Cash read Robert Service’s chilly, spooky The Cremation of Sam McGee. As the trees turn spectacularly red and orange on the UNB campus, we’re also grateful for effusive, colourful celebrations of the season like Paul Lawrence Dunbar’s Merry Autumn and Effie Lee Newsome’s O Autumn, Autumn!... as well as quieter, sweeter moments like Matsuo Basho’s  A Monk Sips Morning Tea and e.e. cumming’s Little Tree. As October draws to a close, Sara Teasdale playfully invites a coven of witches in for a slice of cake in the deliciously Halloween-themed Dusk in Autumn.

As poets, we’re also inspired by Emily Dickinson’s It sifts from Leaden Sieves and George Bowering’s A Sudden Measure, where new snow touches a landscape like a poet reverently names objects and images. Mary Oliver’s First Snow is one of our favorite meta-poetic cozy poems because it puts the poet and speaker on the threshold between inside contemplation and the “white / rhetoric” of the wilderness outside:

and though the questions
that have assailed us all day
remain — not a single
answer has been found —
walking out now
into the silence and the light
under the trees,
and through the fields,
feels like one.

We think this is how we’d like to define the poetics of “coziness.” Coziness is the answer Oliver doesn’t find but “feels” as we look through the liminal “windows” at the snow, as we pass from inside to outside. In Coat, Jane Duran responds to the question of coziness by looking inward, hiding her eyes from the cold outside world, burying deep into her mother’s womb-like winter coat. Richard-Yves Sitoski looks in the opposite direction for answers in Question Mark, which finds him looking past the winter landscape towards “God” and “the stars” beyond.

In our opinion, some of the very best cozy poems are love poems. In Elizabeth Bishop’s It’s Marvelous to Wake up Together, a lightning storm outside contrasts with two cozy lovers inside, with an erotically-charged “bird-cage of lightning” as the threshold around and between them. While reading these cozy love poems, we were surprised by how many were about older lovers and mature relationships, although we probably shouldn’t have been! William Shakespeare’s That time of year thou may’st in me behold and Spencer Reece’s The Fifth Commandment write autumn and autumnal love as a moment for rewriting and reinventing a relationship from inside and outside, respectively. Alan Shapiro’s Aging Lovers and James Tate’s The Thief are domestic and celebratory; a relationship can be cozy, and cozy love is an opportunity for poetic and erotic play. But young love can be cozy, too! Tiffany Atkinson’s Tea is a steamy, sexy version of the cozy poem, while Jennifer L’Hirondelle’s Unentitled cozily positions a “you” and an “I” and a “home” against the bustling (and perhaps hostile) backdrop of a “busy market.”

The poetics of coziness is all about contrast: in fact, many poems we define as “cozy” are about isolation, loneliness, and nostalgia for warmth and family. George Ann Gregory’s Haiku I and Haiku II (Language: Choctaw) juxtapose the speaker’s “rootless” isolation with incoming winter, while Robert Hayden’s Those Winter Sundays, Kenny Knight’s Lessons in Tea Making, and DH Lawrence’s Piano are occasions for middle-aged men to contemplate their complex childhood memories of their parents. William Matthew’s A Happy Childhood is a more ambivalent picture of the cozy “story of your childhood” as perceived from an adult’s outsider perspective, while in Antarctica, Chen Chen contemplates his younger selves across an inhospitable landscape.

Strangely, some of the poems that make us feel coziest are about death—juxtaposing warmth and comfort with cold and mortality. Jo Shapcott’s Procedure is about saying “thank you thank you thank you to the then, and now” in the face of death, while Kwame Dawes’s Coffee Break deals a strange and devastating death blow just when we least expect it. Chen Jun’s awesomely surreal In the Kitchen remakes a cozy morning cooking at home into an indecipherable landscape of “Deep-fried ghosts” and  “oil pans from hell.” J.P. Grasser’s Letter to My Great, Great Grandchild creates an intimate connection across a future ecological apocalypse, while dg nanouk okpik’s poems Warming and A Year Dot put traditional, life-affirming coziness in foreboding contrast with a warming planet. These poems’ “cozy” intimacy with death, their willingness to gently take it by the ears and invite it  in to share a cup of tea or cuddle under the covers, is perhaps best exemplified by Alden Nowlan’s astounding This is What I wanted to Sign off With. “Bend / closer, listen, I love you.” What’s cozier than that?