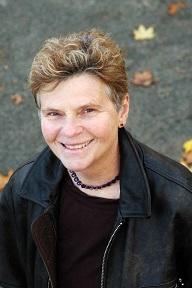 suppose a rope   suppose linear   a trope is not always   not
necessarily round   not a birthday   a cake hiding ten shining dimes
not a celebration   a rope might be plastic   if a rope   it could be red
or it could be made of brown hemp    long enough and an occasion to jump.
occasionally   and when the weather permits
an occasional recourse to hold something or someone   or lasso
there is always an end to hold   sometimes two   if there are two ends
two girls must hold, one at each end of the span

Soul of the world

Arleen Paré has published five books: Paper Trail, Leaving Now, Lake of Two Mountains, He Leaves His Face in the Funeral Car, and The Girls With Stone Faces. Originally from Montreal, she now resides in Victoria, where she lives with her partner, Chris Fox