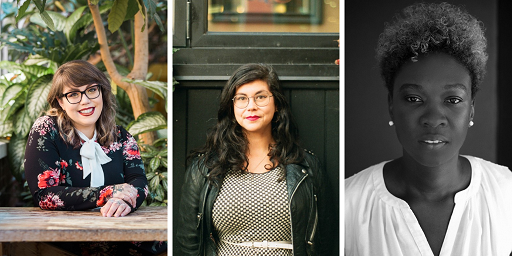 The Fiddlehead's 2020 Poetry contest is now open and we're excited to announce that Jenna Lyn Albert, Adèle Barclay, and Canisia Lubrin are the talented poets who will be judging this year's submissions!

Jenna Lyn Albert is a queer Acadian poet and graduate of the University of New Brunswick’s Creative Writing program. Her poetry has appeared in The Malahat Review, The Puritan, and Riddle Fence. Albert lives in Fredericton, New Brunswick, where she is a member of The Fiddlehead’s editorial and is serving a two-year term as the City of Fredericton’s Poet Laureate (2019-2020). Her debut collection of poetry, Bec & Call, was published with Nightwood Editions in September 2018

Adèle Barclay's essays and poems have appeared in many North American journals and anthologies, including Vallum, The Heavy Feather Review, Cosmonauts Avenue, The Walrus, glitterMOB, The Pinch, PRISM, and elsewhere. She is the recipient of the 2016 Lit POP Award for Poetry and The Walrus’ 2016 Readers’ Choice Award for Poetry and has been nominated for a Pushcart Prize. Her debut poetry collection, If I Were in a Cage I’d Reach Out for You, (Nightwood, 2016) won the 2017 Dorothy Livesay Poetry Prize. Her second collection of poetry, Renaissance Normcore, was published by Nightwood Editions in October 2019 and was nominated for the 2020 Pat Lowther Award for Poetry. She was Arc Magazine's 2018-19 Poet in Residence, Canadian Women in Literary Arts 2016 Critic in Residence, and the University of the Fraser Valley's 2020 Writer in Residence. She is an editor at Rahila's Ghost Press and teaches literature and writing at Capilano University.

Canisia Lubrin is a writer, critic, editor and teacher whose most recent book is The Dyzgrapxst (McClelland & Stewart, 2020) as seen in The New York Times, Quill & Quire, Jewish Currents, Humber Literary Review, and elsewhere. Lubrin’s international publications include translations of her work into Spanish, Italian, French and German. Her writing has been recognized by, among others, the Toronto Book Award, Journey Prize, Gerald Lampert, Pat Lowther, and the Writers Trust. Her debut, Voodoo Hypothesis (Wolsak & Wynn, 2017), was named a CBC Best Book and her writing has appeared and is forthcoming in Room, Brick, Joyland, Poetry London, Poets.org, blackiris.co, and elsewhere. Lubrin’s debut collection of short fiction is forthcoming. She has an MFA from the University of Guelph.

Check out the contest submission guidelines for more information!