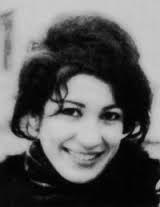 Iman bivarim beh aghaz fasle sard —
“Let us believe in the beginning of the cold season”
As the weather grows colder and academic deadlines collide with the hectic holiday season, the urge to procrastinate mounts. At some point I eventually give in and spend a few of these long, gray afternoons with the poetry of Forugh Farrokhzad. Her intricate manoeuvring of abstraction, visceral imagery and dense metaphor remind me why, like her, “I respect poetry in the very same way religious people respect religion” (Collected Works).
I first came across the Iranian poet and filmmaker by chance at the annual University Women’s book sale in Moncton, NB when I was ten years old. Despite my general lack of acquaintance with the adult world and its gender politics, her work possessed and moved me — something of the deeply nuanced and complicated subject matter conveyed through deceptively simple language entranced me. The book Tavallodi digar or Another Birth was lost in a move and my parents were unable to locate another English translation.

Fourteen years later, an Iranian friend re-introduced me to Farrokhzad. He gave me a bilingual Farsi/English collection and loaned me recordings of her poetry which, despite the language barrier and sometimes distracting musical interludes, greatly contextualized her lyrical phrasing.  This eloquent performativity that expounded her Modernist free-verse and feminism deeply offended the conservative male Iranian poets of her time. Farrokhzad was the first to detail the difficulties of life for Iranian women and she re-wrote stereotypes of modest, subservient women as caged, passionate, independent, and sexual individuals. She also wrote about her lovers in detail and had no issue juxtaposing the erotic with Islamic tradition (“Conquest of the Garden” & “The Wind-Up Doll”).

As the citizens of Iran and other Middle Eastern countries strive in hopes of achieving leadership that more accurately reflects contemporary visions of its peoples’, I cannot help but think of Forugh Farrokhzad whose nature seemed to be innately connected with a desire for equal human rights. In her poem, “Let us believe in the beginning of the cold season”, Farrokhzad re-examines her life’s struggles against prominent ideology. The poem’s tone is largely pessimistic: “And this is I/ a woman alone/ at the threshold of a cold season/ at the beginning of understanding/ the polluted existence of the earth...and the incapacity of these concrete hands.” Yet it claims believing in “the beginning of a cold season” as central to the metaphor renewal, of taking up the struggle once again: “next year when spring/ sleeps with the sky beyond the window/ and her body exudes/ green shoots of light,/ branches will blossom./ Let us believe in the beginning of the cold season.”

Raised in a household that strove to maintain a conventional appearance, she was married at 17 and divorced at 19. Custody of their son was awarded to her ex-husband. While composing and performing poetry has been and continues to be a vibrant and thriving art form in the Middle East, as a divorcée writing about feminist concerns and her sexuality, she gained much disapproval. When living abroad she met her long-term lover Ebrahim Golestan and after their return to Iran she filmed a documentary called The House is Blackthat explored the inhumane treatment of lepers. She died in a car accident in 1967, at the age of 32.

In 2010, Forugh Farrokhzad was excluded from an Iranian published compendium of poets despite her continuing international and Iranian popularity. Most critics believed this was a political decision as her poetry is still considered inflammatory (PayvandIran News).  However, Farrokhzad’s popularity and politics took a stance the 1999 film Bad ma ra khaha bord or The Wind Will Carry Us by Iranian filmmaker Abbas Kiarostami, the title an abbreviation of one of Farrokhzad’s most popular poems. In one scene, the protagonist (or antagonist, depending on how he feels that day) recites a portion of “The Window” and “The Wind Will Carry Us Away” to a young woman as a way of encouraging her to find ways of meeting the world outside her village.

The most recent and contemporary translations of Farrokhzad’s work have been collected by Sholeh Wolpe who has chosen what she considers to be Forugh’s best or most provocative poems. Wolpe’s translations are very fine but in some instances I feel she has stepped too far away from Farrokhzad’s traditional lyricism. This edition was published under the title Sin by the University of Arkansas Press in 2007. A Lonely Woman: Forugh Farrokhzad and Her Poetry by Michael C. Hillman, is a text that critically examines her life and literary career; excellent translations of her better known poems are included. Internet book dealers can usually scrounge the odd bilingual copy of Asir (Captive), Divar (The Wall) or Tavallodi digar (Another Birth).
Kayla Geitzler
Editorial Assistant
Tags:
features
poetry