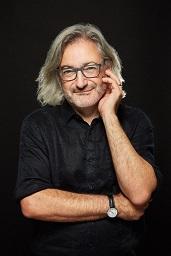 Laba is a virtuoso philosopher clown, the lovechild of John Ashbery and Groucho Marx, the Coen Brothers and James Tate, dancing on the jiggly high wire of our absurd, troubling, and hilarious carnivalesque times, his poems finely attuned to the tang, the joy and sorrow, the nostalgia and surprise of our present moment. With disarming depth and insight, these hilarious yet strangely probing poems show us what it means—what it can mean—to live in a semiotic funhouse, to have language and be alive with its crazy delight.

With delightfully subversive wordplay and intertextual sleight of hand, Tanis MacDonald wanders the text of the modern city, exploring its civil energies with intelligence, incision, compassion, music, ferocity and wit. A Sibyl’s elegies for the civil legacies of the past, her feisty poems interrogate the mansplaining streets, finding the always-there voices and experiences of women in its architecture and shadows, curbs and enthusiasms, structures and strictures, its texts and traditions, violence and vibrance, twists and détournes. The city: “She was never who/we thought although we/ loved her until she was.” Go with MacDonald as she guides you through the streets of Mobile. It’s a tour de force.

A book bursting with astounding virtuoso turns but also resonance, elegance, emotion & the invigorating poesis of making & the exploration of language, mind & the shape and pattern of the world with wonder, & insight, like using language like a Hadron Collider to see what might be there.

In these astounding visual poems, Betts gives an Artificial Intelligence Deep Dream generator some Rorschach tests. The uncanny zeitgeist of our time is revealed in these beautiful painterly symmetrical images, wallpaper of a trippy kaleidoscopic children’s book filled with memories and predictions of near organics forms, wallpaper of our strange and marvelous times.

Mesmerizingly preternatural, strange and in the uncanny valley between senselessness music and touchingly lyric, Banu’s chapbook is a series of phonic, visual, and sometimes literal translations of Mihai Eminescu’s poetry. Set in the present and in an oblique literary past, these poems are resonant, surprising, and inventive.

beaulieu takes material from Louis Aragon’s Treatise on Style and creates a tactilely beguiling, suite of Letraset poems, rich in visual and semantic craquelure and disintegration, the syntax translucent—not grammatically legible but made into a music of allusion and allusiveness. This is another of beaulieu’s elegant projects where he is able to take a particular approach to the visual poem and create a longer and more complex form from its iteration and variation.

This suite of poems pulsates with the vibrant intelligence, music, tactility and sense of being-in-the-world that is characteristic Christakos. The lines are energized and self-aware. We are always/already writing/reading/poeming, retreating and advancing through language. And we communicate and wrestle and dance with communication and the problem/possibility of communication through (social) media, language, received notions of self, our culture and the world