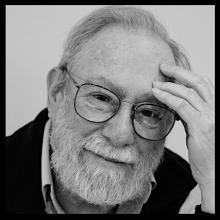 I learned a lesson in generosity the first and only time I met Marvin Bell in person. I was at Arizona State on a Fulbright Fellowship, and Marvin had come to read. I was invited to attend a dinner in his honour, where he sat at the head of table, notable for his eyes, somehow both piercing and gentle. Around him were faculty engaging him in banter, while some graduate students and I sat at the far end.  He startled everyone when he suddenly stood and ambled toward us, making a point of speaking to each of us, asking who we were, our interests in poetry, and then wishing us the best.

I mentioned that I was the editor of The Fiddlehead and asked for his email address. I often asked famous writers for addresses with the hope of obtaining work for The Fiddlehead; almost no one ever responded to my emails later, but Marvin replied with genuine enthusiasm, and so began a longtime relationship with the magazine. Marvin immediately sent us poems, and after the issue arrived in his mailbox (I picture the breadbox style with the little red flag) he replied with these kind words: ““I was made aware again of how substantial The Fiddlehead has become and of its quality. The magazine puts to shame many of the literary magazines in the U. S.”

We soon published a retrospective of his work with new poems, a project edited by Sharon McCartney and me. Sharon had taken a number of courses with him at the Iowa Workshop, and I have fond memories of sitting in her living room on a frigid winter’s day in late afternoon light talking over favorite poems. Over the years we published his remarkable “Dead Man” poems, all sorts of lyrics, and the conversations in prose poetry between him and Christopher Merrill.

Marvin provided my favorite anecdote about my experiences editing The Fiddlehead. He had sent us a selection of poems from which Ian LeTourneau and I had selected a few. My heart sank as I read of our favorite poem that “I am afraid I will have to withdraw this poem from publication,” (Oh, no), and then the rest of the sentence, “because it has already been published . . . by you.”  Sure enough, there it was in The Fiddlehead some years earlier.  Marvin reported that upon his discovery he could hear his wife “laughing her head off in the next room.” I wrote that “the poem was so good we felt we had to publish it twice.” A few weeks later a package arrived at our office and in it in a frame was his poem and my comment, and it hangs on our walls to this day.